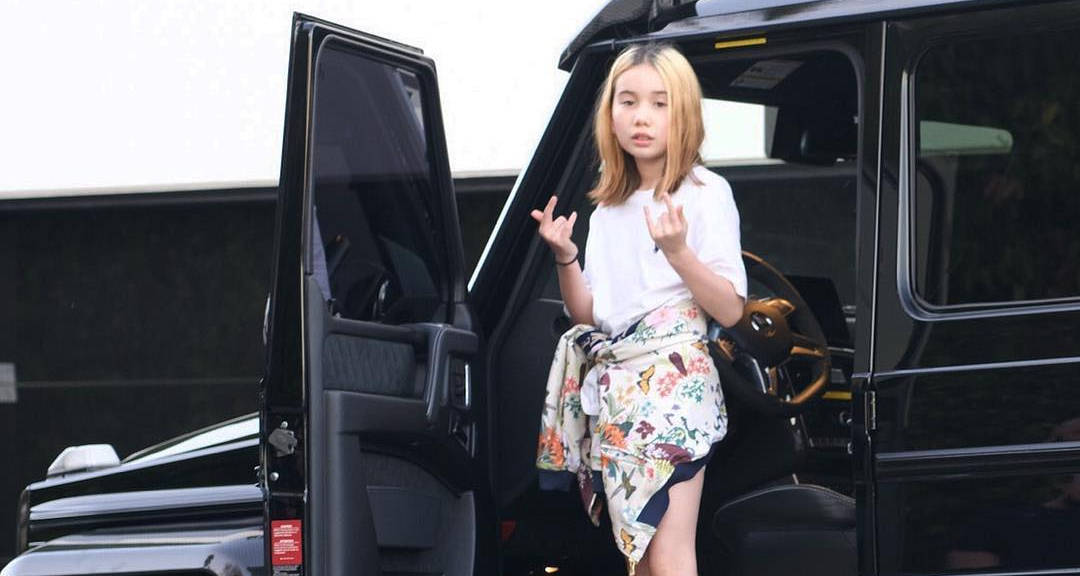 Lil Tay standing on a Hummer and announcing her house arrest. Credits: Instagram/liltay

Something we never thought would happen, happened. The youngest flexer of the century a.k.a. Lil Tay is on house arrest! And the kicker, her phone has been taken away! This little announcement has #FreeLilTay trending on social media for all the hilariously wrong reasons. Is this just another ploy for attention or a dream come true for Tay’s “broke biches?” As usual, the Internet has a lot to say about Lil Tay’s alleged house arrest.

Lil Tay’s Instagram post on April 29 was attention-grabbing, to say the least. The caption included “House arrest” and the hashtag, #FreeLilTay. It was a very curious occurrence from the nine-year-old Instagram sensation.

Her Instagram Story from the same day gives a better explanation. The story was reportedly made by Tay’s manager instead of the foul-mouthed kid herself.

“Lil Tay is on house arrest and got her phone taken away,” read the Instagram Story with a reminder that she’ll be back soon. The same hashtag was also included in the post.

Lil Tay’s haters have never shied from demanding that someone needs to take away her phone. Did her naysayers finally get their prayers answered?

It may be temporary, but yeah.

It appears this isn’t some gimmick as Tay is prone to do. Maybe Woah Vicky needs to bail her out or devise a prison break plan!

With the noisy brat temporarily off the Internet, perhaps it’s time for the new Kardashian babies to finally enjoy the spotlight.

Why Is Lil Tay on House Arrest?

If you haven’t noticed, we’re exaggerating. Just as “house arrest” is an exaggeration.

Legally, it’s very unlikely that she’d be on house arrest. There are a lot of nuances for an adult to be legally confined to their residence, let alone a nine-year-old kid whose biggest crime is unjustified fame.

“House arrest” here is tween-speak for grounded. It’s not known exactly why Lil Tay is grounded, but we can imagine a few scenarios.

Perhaps, as many of us wished for, her parents finally cracked the whip on her shenanigans. Many are left wondering if it was something outside of her online infamy that took away her sensation-creating privileges.

Maybe she forgot to do her homework or didn’t do her chores. (She’s nine. We can’t emphasize this enough.) Or, could it be that a certain archnemesis is pulling strings here?

ICYMI, Lil Tay and Woah Vicky have tag-teamed against Bhad Bhabie in a rivalry no one can figure out.

so apparantley the nine year old girl who drives cars without a license and has shooters here there and everywhere is on house arrest and is trying to get #freeliltay to be a thing…ive had enough of the world for one day.

Lil tay is on house arrest and got her phone taken away. They even made a hashtag for it ??#FREELILTAY HAHAHAHAHAHAHAHA OMG GURL THAT'S WHAT U GET WHEN U DON'T WASH UR DISHES

Lil Tay posted a pic on insta about being on house arrest (she’s 9 years old) and Perez Hilton commented on it and said “dream Kardashian coming to bail you out”. Y’all i’m weakkkkkkk