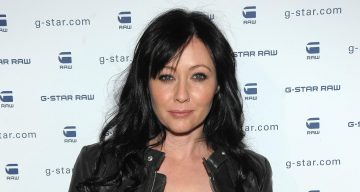 Lifetime Movies’ No One Would Tell will premiere on September 16, 2018, at 8:00 p.m. EST. The drama film was written by Caitlyn D. Fryers and directed by Gail Harvey and stars some well-known Hollywood actors. Here is everything you need to know about No One Would Tell’s cast & plot.

No One Would Tell’s Plot

No One Would Tell 2018 is an update of the 1996 TV film of the same name. The movie is all about the emotional and physical abuse in teen relationships.

Laura Collins (Shannen Doherty) is a single mother to her daughter, Sarah (Matreya Scarrwener). Laura’s relationship history was pretty awful, so when Sarah starts dating super charismatic Rob Tennison (Callan Potter), she is quite thrilled and happy for her daughter.

Soon after, Laura sees that Rob is quite possessive and has a dark side. But she doesn’t interfere in her daughter’s relationship until Sarah disappears.

Laura must somehow gather the courage to fight for her daughter when a case against Rob is brought up. The case is presided by a famous and powerful judge played by Mira Sorvino.

No One Would Tell’s Cast

Actress Shannen Doherty is also a producer and a television director. She is famous for her work in the original Beverly Hills, 90210, Girls Just Want to Have Fun, Heathers, and Charmed.

In March 2015, Doherty was diagnosed with breast cancer, which reportedly spread to her lymph nodes. She had to undergo radiotherapy and chemotherapy following her surgery.

The 47-year-old revealed in April 2017 that her cancer was in remission.

Matreya Scarrwener is an actress and casting director famous for Once Upon a Time, Ties That Bind, and Imaginary Mary.

Her other acting credits include working in TV shows like Spooksville, Falling Skies, and Strange Empire. Additionally, Scarrwener has worked in films like Living Shame, Blood Moon, and Insecurbia.

Callan Potter spent two seasons at the Canadian Stratford Festival working as a stage actor. He is known for his roles on TV shows like The Other Kingdom and Murdoch Mysteries.

The 20-year-old has worked in several TV movies like Bruno & Boots: Go Jump in the Pool, The Swap, and Bruno & Boots: The Wizzle War. His future projects includes Riot Girls.

Is No One Would Tell a True Story?

Apparently, the Lifetime movie is indeed based on a true story. It follows the real life account of a 16-year-old high school student named Jamie Fuller, who murdered his 14-year-old girlfriend, Amy Carnevale.

Fuller was very possessive and abusive towards Amy. When Carnevale broke up with him, he didn’t take it too well. Fuller lured Carnevale to spend time with him and his friends in the woods.

When Fuller was alone in the forest with Carnevale, he reportedly stabbed her 10 times and slashed her throat. Carnevale was murdered on August 23, 1991, in Beverly, Massachusetts.

If you haven’t No One Would Tell’s trailer, then feel free to click on the link below. Also, let us know in the comments section below if you’ll be watching the film.