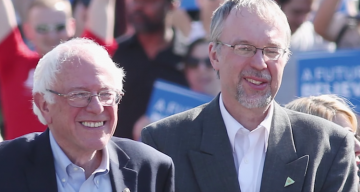 The legacy continues as Bernie Sanders’ son, Levi, recently announced his run for congress in New Hampshire. But what do we know about him and what are his chances? Here’s what you need to know, with our Levi Sanders wiki.

Who Is Levi Sanders?

Levi Noah Sanders, age 48, was born on March 21, 1969, in Brightlook Hospital in St. Johnsbury, Vermont. His mother, Susan Campbell Mott, was dating his father at the time, but they later broke up and she moved to Burlington. Bernie followed to be close to his son. The break up was noted as amicable and the two had joint custody. Though Levi admired his father growing up, he never called him “dad,” due to his anti-establishment upbringing.

“I never have called him Dad,” he told People magazine. “Even when I was 6 years old, I thought it was childish. He was a friend, not an authoritarian.”

Though Levi has step-siblings from his father’s marriage to Jane O’Meara Sanders, Levi is Bernie’s only biological child.

Levi graduated from the University of Oregon in 1992 with a degree in history and worked as an analyst for a Massachusetts legal services office. He is married to Raine Riggs, a neuropsychologist and they have three adopted children from China.

Levi has been a resident of New Hampshire for 15 years and is looking to take a bigger role in the place he calls home. While Levi never held public office before, he worked closely with his father’s failed 2016 presidential campaign.

“After much thought and consultation with my family, friends and the people of New Hampshire, I am excited to announce today that I am running for Congress,” he said in a statement. “This is a unique opportunity to listen to the hard-working men and women of New Hampshire about the issues that matter to them.”

Levi is running to replace Congresswoman Carol Shea-Porter and like his father, he is fighting for “the little guy.”

“The majority of voters in New Hampshire, and around this country, agree that we need a Medicare For All healthcare system which guarantees healthcare to every man, woman, and child without out of pocket expenses. We need an educational system which says that whether you are rich or poor, you have the ability to go to a public college and/or university tuition free.”

The younger Sanders also touched on the minimum wage gap, which has been a prevailing issue, as well as equal pay and drug addiction.

“We need to demand that we have a minimum wage which allows people to work forty hours a week without being in poverty. It is urgent that we address the opioid problem which is at a crisis level in New Hampshire. We must demand that women finally earn the same pay as men. It is unacceptable that we haven’t found the political courage to pass sensible gun legislation.”

Levi is the eighth Democrat to enter the race, with the deadline ending in June and the primary election occurring in September.