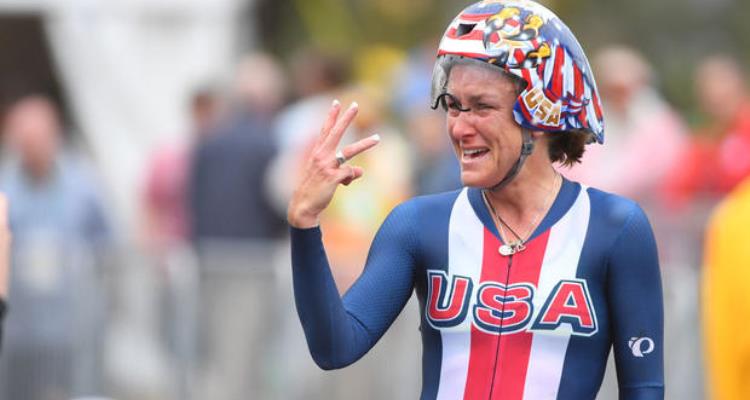 Kristin Armstrong, unlike many other athletes’, doesn’t have any fancy endorsement deals so you won’t see her on cereal boxes or in Nike commercials. In fact, she went MIA for quite some time because she retired and underwent several surgeries for her hips, so exact information on Kristin Armstrong’s net worth is not actually known.

Kristin Armstrong actually has a full-time job at St. Luke’s Hospital as a director of community health. When preparing for Rio, she had to cut back on her hours so that she could find the time to train. When she’s not cycling, her role at work allows her to bridge the gap between nonprofit groups and physicians, along with coming up with disease prevention strategies.

Kristin Armstrong’s husband, Joe Savola, is a huge support to her as he does whatever he can to ensure that her bike runs the best it can. He has said in interviews he will lose sleep if he hasn’t done all his tests and checks, even if they don’t actually make a difference – to him it’s all about the process of helping Kristin win.

Kristin’s family life can be quite confusing at times because she is often mistaken for Lance Armstrong’s ex-wife – her name was also Kristin! There is no actual relation between Kristin and Lance and it is basically mere coincidence that two Armstrong’s are both great cyclists.

Kristin and Joe have one son named Lucas who was born in 2010.

Doping has been a controversial subject this year during the Olympics, even surrounding Kristin. People have been searching “Kristin Armstrong doping” but it’s not because the cyclist was doping herself, rather she beat out Russian cyclist Olga Zabelinskaya, who was previously banned from the Olympics due to doping.

Zabelinskaya was only cleared as of last week after passing a drug test to race, and although she was favored to win, she lost by a mere five seconds to Armstrong! Goes to show you that cheaters never win!

Age Ain’t Nothin’ But a Number

Who says that athlete’s “expire” at a certain age? It would definitely suggest otherwise with the win which Kristin pulled through just days before her 43rd birthday. Kristin wishes to be an inspiration for all moms and other female athletes.

In an interview after her win Kristin said, “I think that for so long we’ve been told that we should be finished at a certain age. And I think that there’s a lot of athletes out there that are actually showing that that’s not true. For all the moms out there, I hope that this was a very inspiring day. Working at a great hospital in Boise, Idaho, and being a mom has been my secret weapon. It provides me balance and it keeps me on track and it keeps me super focused.”

Kristin has shown the world that age is only a number and focusing on your goals in life can help you better achieve them – no matter what you have going on.

As mentioned, today is Kristin’s birthday and we’re sure it’s probably her most special one yet. While most people are freaking out by the time they reach their 40s, Kristin is relishing in her accomplishments with her loving family by her side.

Want to learn more about Kristin Armstrong? No worries! We have more great information about her, along with other Olympic news, here.