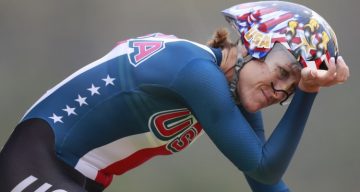 But are they family or do they just share their love of cycling? Keep reading to find out, because we have all the details you need!

Kristin Armstrong was born on August 11, 1973 in Memphis, Tennessee and is a road bicycle racer. Her father was an officer in the U.S. Marines, which meant she often had to move, if needed. In addition to living in Tennessee and California, Kristin also lived in North Carolina, where she attended Havelock High School. Kristin also went to school abroad in Japan and graduated from Kubasaki High School in 1991.

She graduated with a Bachelor of Arts in sports physiology from the University of Idaho in Moscow. She currently resides in Boise, Idaho with her husband, Joe Savola, and their son, Lucas William Savola.

Is She an Armstrong?

Since her gold medal triumph yesterday, fans of the Rio Olympics have been fascinated with Kristin, wondering if she’s related to famous cyclist, Lance Armstrong. Many have wondered if they’re siblings or if she’s his ex-wife, but she’s actually neither of those things! Kristin is often mistaken for Lance’s ex-wife, Kristin Armstrong (nee Richard) but the truth is: they just have common last names. Though Kristin and Lance have the same passion for cycling, are a year apart and even share the same last name—they aren’t related. We know this comes as a shock, but anyone who knows anything about Lance’s biography, would already know this fact!

Kristin may not share a branch on Lance’s family tree but she does share his ability to win, which is exactly what she did when she won a gold medal yesterday in the Women’s time trial race. This is her third gold medal and she owes her motherhood to being her secret weapon for winning. For similar Olympic stories like this one, click here and stay tuned for more Rio Olympic coverage!