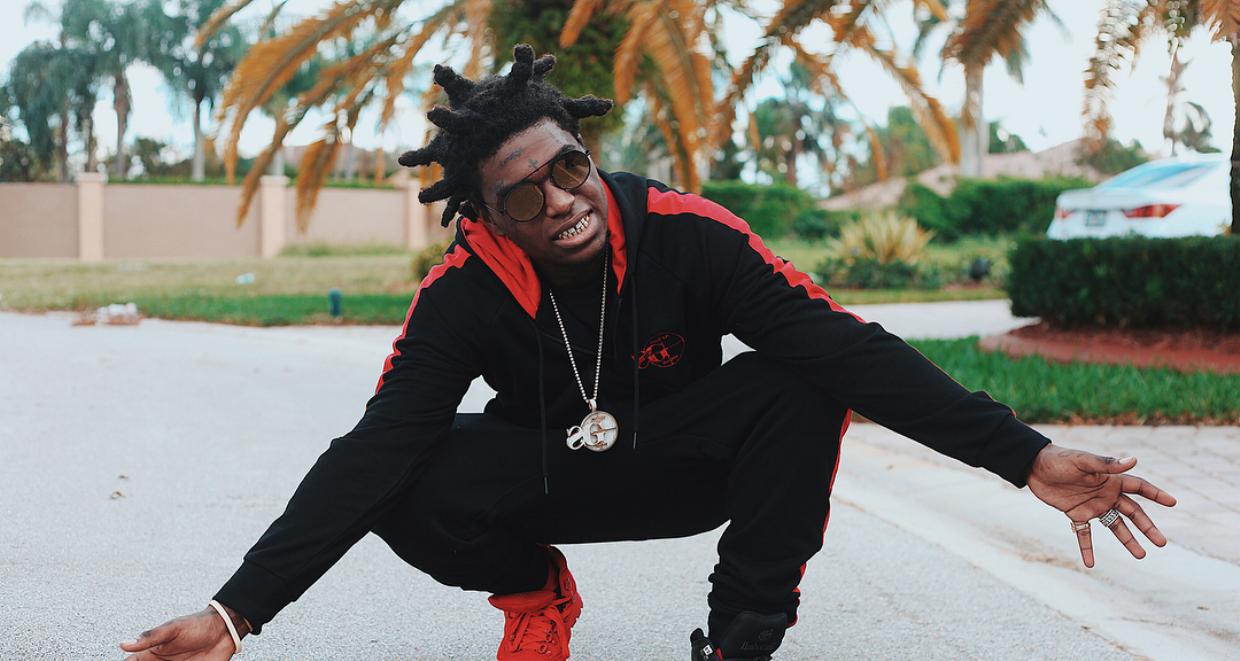 While growing up, Kodak Black had only one dream, which was to make millions of dollars. His hard work and determination paid off when he became a rapper at a very young age. Kodak Black’s net worth in 2018 is estimated at $600,000. Keep reading to know how he made his fortune.

Ever since Kodak Black was young, all he dreamed about was becoming rich and giving his family all the comforts in the world. He worked on that dream from a very young age, and now, he is an established rapper with an estimated net worth of $600,000. Throughout his career, Kodak has released one album and several mixtapes, which have brought him success so far in life.

Kodak’s music is mostly about past and future criminal wrongdoings. He claims that Boosie Badazz and Chief Keef influenced him to become a rapper.

Before He Became Kodak Black

He was born Dieuson Octave on June 11, 1997, in Pompano Beach, Florida, which makes Kodak Black’s age 20. His mother, Marcelene Octave, raised him, and he has a brother named John Wicks.

Kodak was raised in Golden Acres, which is a public housing project in Pompano Beach.

When he was studying in elementary school, Kodak started rapping and would often visit the local trap house after his school to record songs. However, Kodak would often get into trouble by participating in fights. In fact, he was kicked out of school in fifth grade because of a fight.

When he was small, everybody would call him Lil’ Black. But when Instagram was introduced, he decided to use Kodak Black as his handle instead.

When Did He Become a Rapper?

Kodak decided to use the moniker Kodak Black as his stage name, and his fans loved it.

At the age of 12, Kodak started his rap career by joining the group, Brutal Youngnz. He later joined the local rap group, The Kolyons.

On June 11, 2016, Kodak’s next mixtape Lil B.I.G. Pac was released. In February 2017, Kodak’s single, “Tunnel Vision,” was released and ranked at No. 6 on the U.S. Billboard Hot 100. The single, which is from his studio album, Painting Pictures, sold more than two million copies with estimated sales somewhere around $2.58 million. 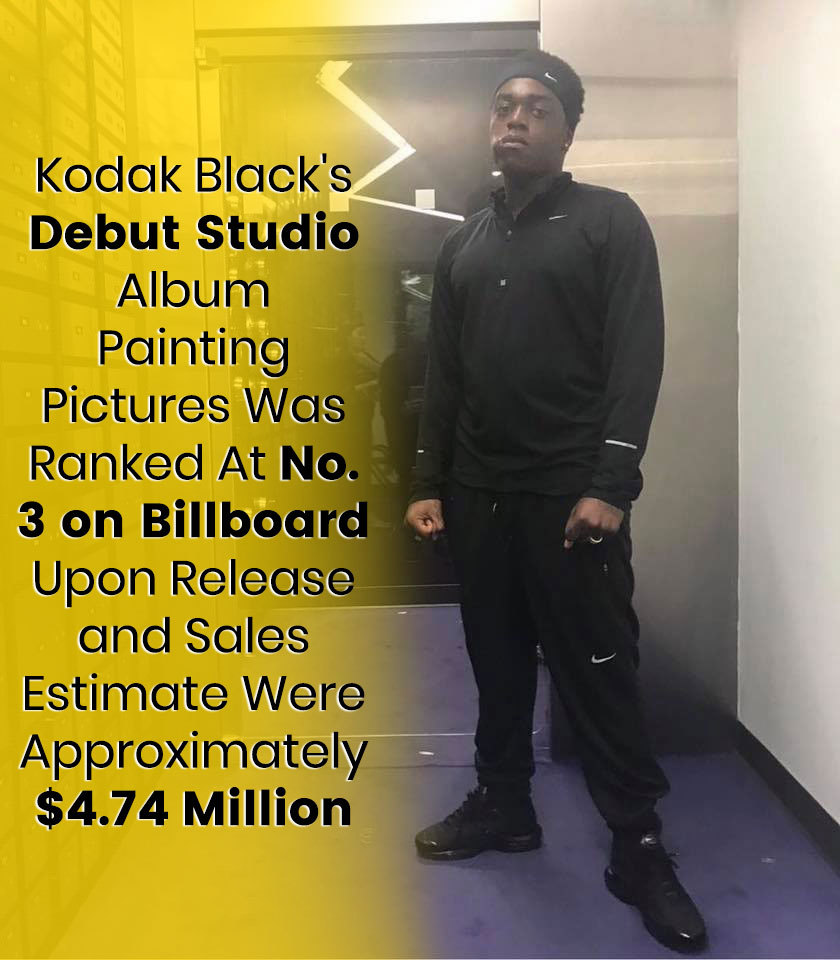 Painting Pictures was released on March 31, 2017, and ranked No. 3 on the Billboard 200. Album sales are estimated at approximately $4.74 million.

A deluxe version of Project Baby 2: All Grown Up was released in November 2017. One of the songs from this mixtape, “Codeine Dreaming,” was certified gold.

On February 14, 2018, his mixtape, Heartbreak Kodak, was released. However, it received mix reviews from the listeners. 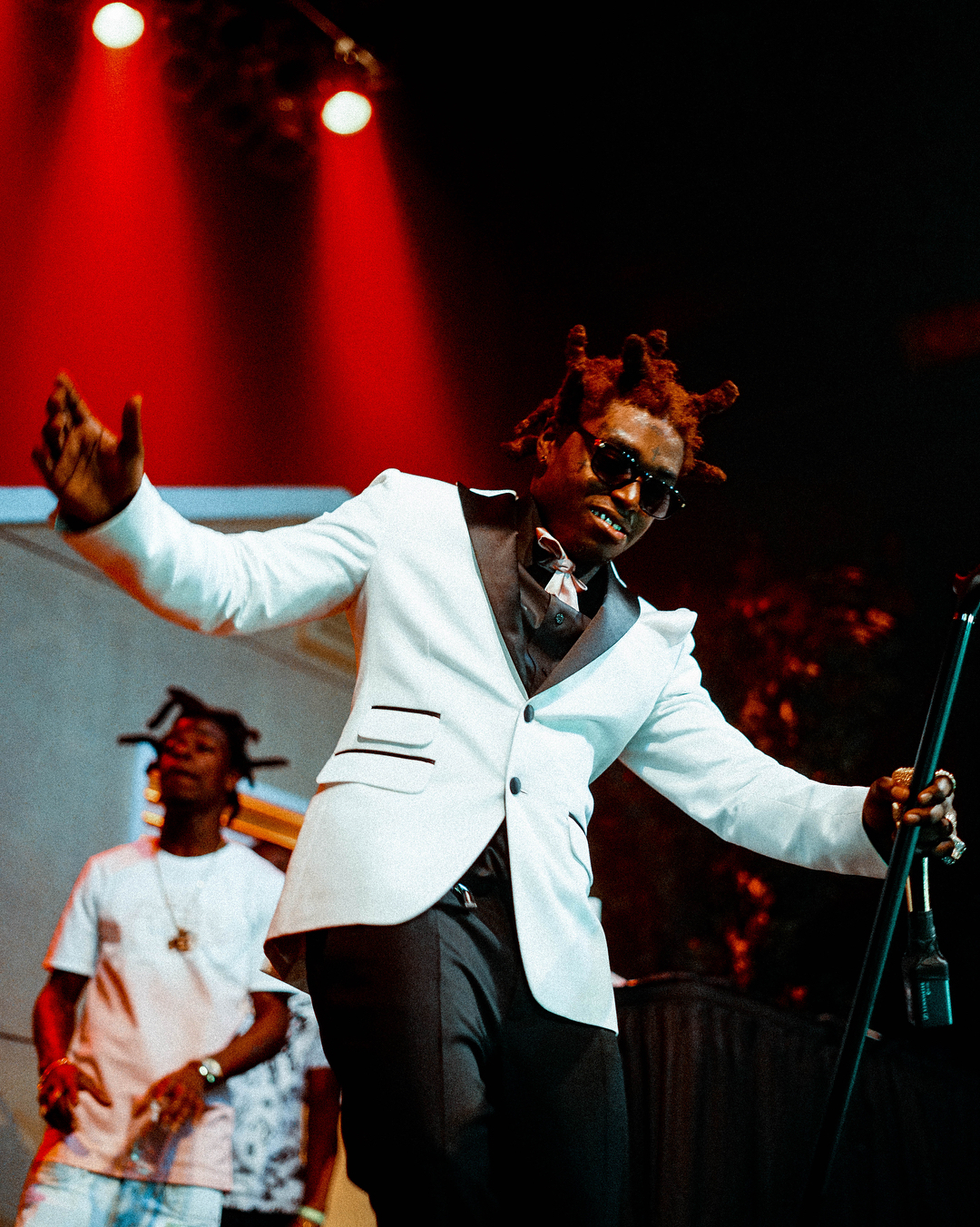 Besides the sale of his songs, albums and mixtapes, Kodak also earns a good amount of money from his apparel business.

Also Read: Kodak Black’s House Raided: Is He in Jail Again for Possession of Firearms?

Last year, there was plenty of drama between Kodak and his baby mama, Jammiah Broomfield. The pair is no more together but they have a son, King Khalid.

According to the child support agreement, Kodak agreed to shell out $4,200 per month to Broomfield until 2033. The rapper will also take care of King Khalid’s health insurance costs. 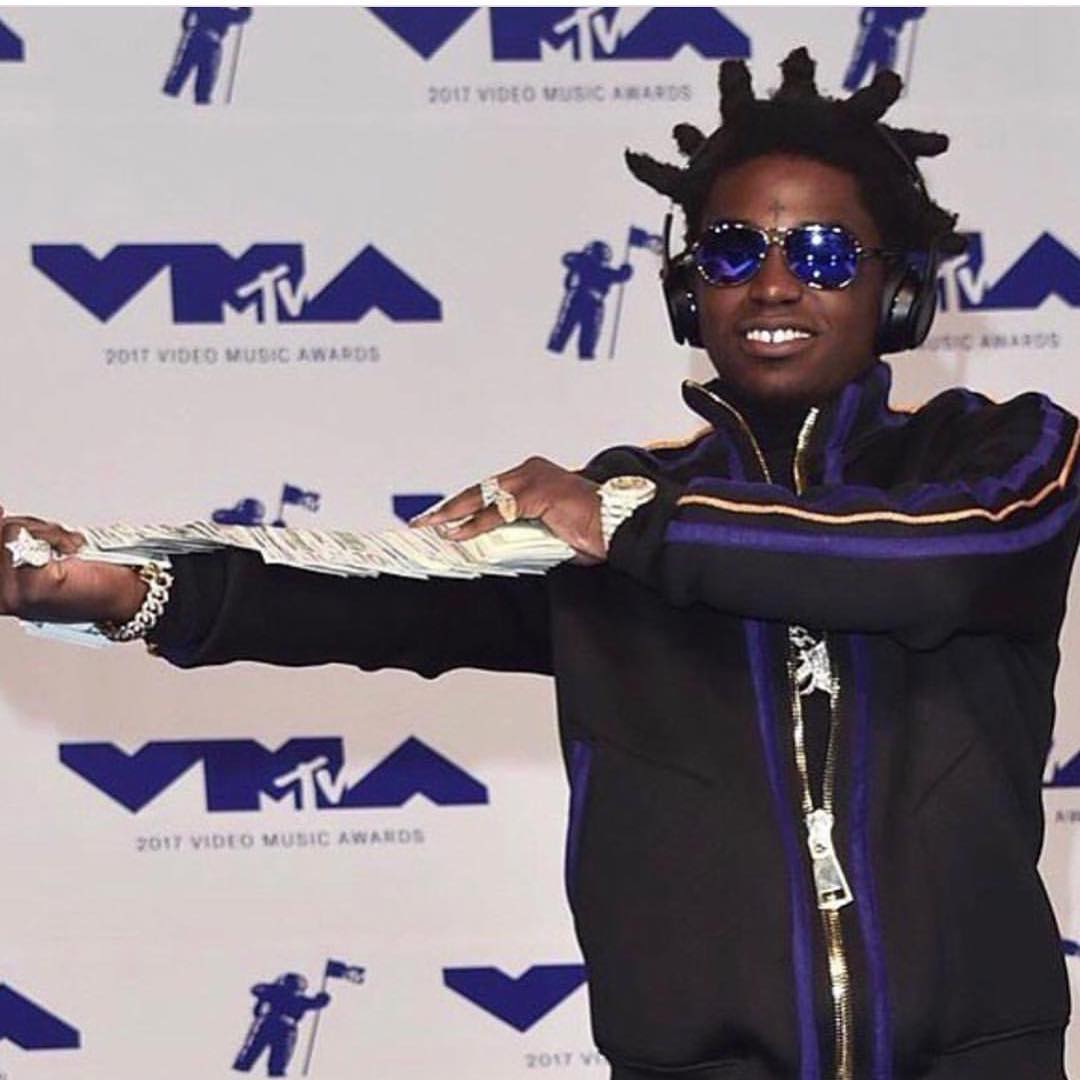 Kodak Black at the MTV VMAs 2017 where he was nominated for Best New Artist. Credits: Instagram/kodakblack

Inside Kodak Black’s Mansion in Florida

Although Kodak has been surrounded by a lot of controversies and spent much of his time in either prison or house arrest, he has still managed to buy himself a lavish mansion in Pembroke Pines, Florida.

Kodak’s crib is a beautiful 4,825-square-foot mansion with five bedrooms and five bathrooms, as well as plenty of garage space to keep his cars. The price of the home is estimated at $936,685.

It looks like Kodak is obsessed with TV’s because he has one in each room of the home, including his bathroom! In fact, he also has a theatre room where he can watch movies.

Additionally, the property also includes a fenced yard with a well-kept lawn, a barbecue area, and a spa with a hot tub.

Kodak is living the dream as he even has a private golf course with an outside bar to quench his thirst. Of course, he has a swimming pool, too.

The home looks quite spacious and beautiful and was featured in the video of his song, “First Day Out.”

His Collection of Cars

This 20-year-old rapper evidently believes in living life like there ain’t no tomorrow. Besides having a lavish house, Kodak also roams around in some of the finest automobiles.

His car collection includes a red BMW X6 with a TwinPower Turbo inline six-cylinder engine and the price starts at $66,245. His son, King Khalid Octave, drives around in the kid version of his red BMW. 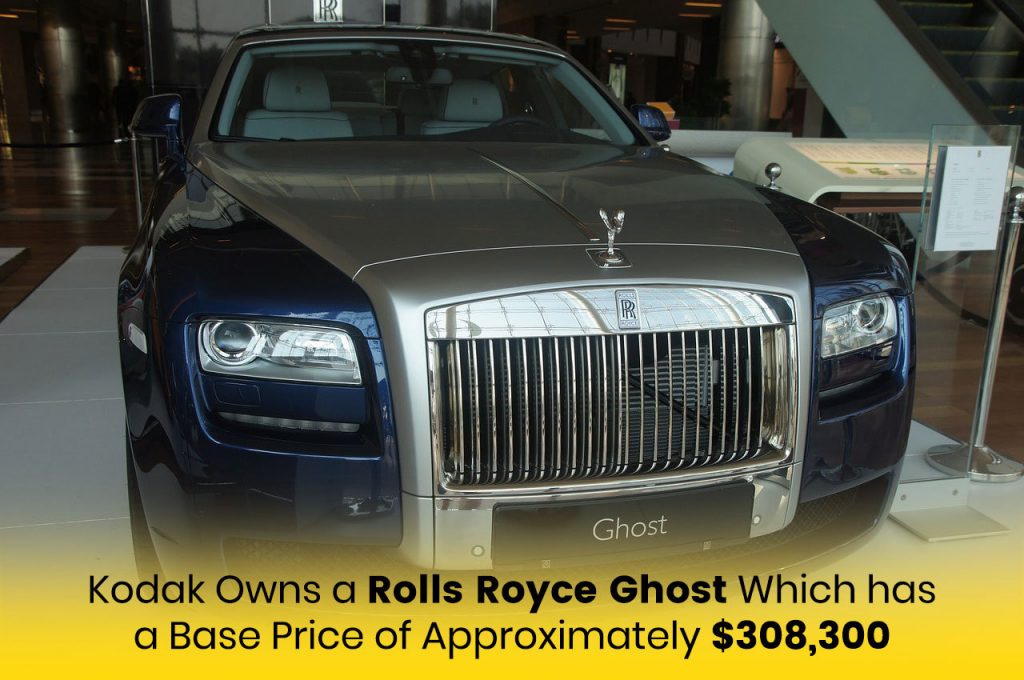 Kodak likes to drive in style and owns a Rolls Royce Ghost. The base price of the vehicle is approximately $308,300.

Additionally, he owns an orange Cutlass with gold rims. Kodak even allegedly bought his mother a Mercedes Benz.

He posts a lot of photos with different cars. But it is unclear if the cars belong to him or he rents them for his music videos.

It is quite evident from his Instagram posts and videos that the man likes to wear some serious bling-bling. He had a gold grill, which he liked to show off in videos or when posing for photos. It looks like he has spent quite a bit of his money on jewelry.

Kodak also has a custom Cuban link chain with a coin pendant embossed with “In Kodak We Trust” and the year 1997. It is made of gold and surrounded by diamonds with a giant Cuban link. 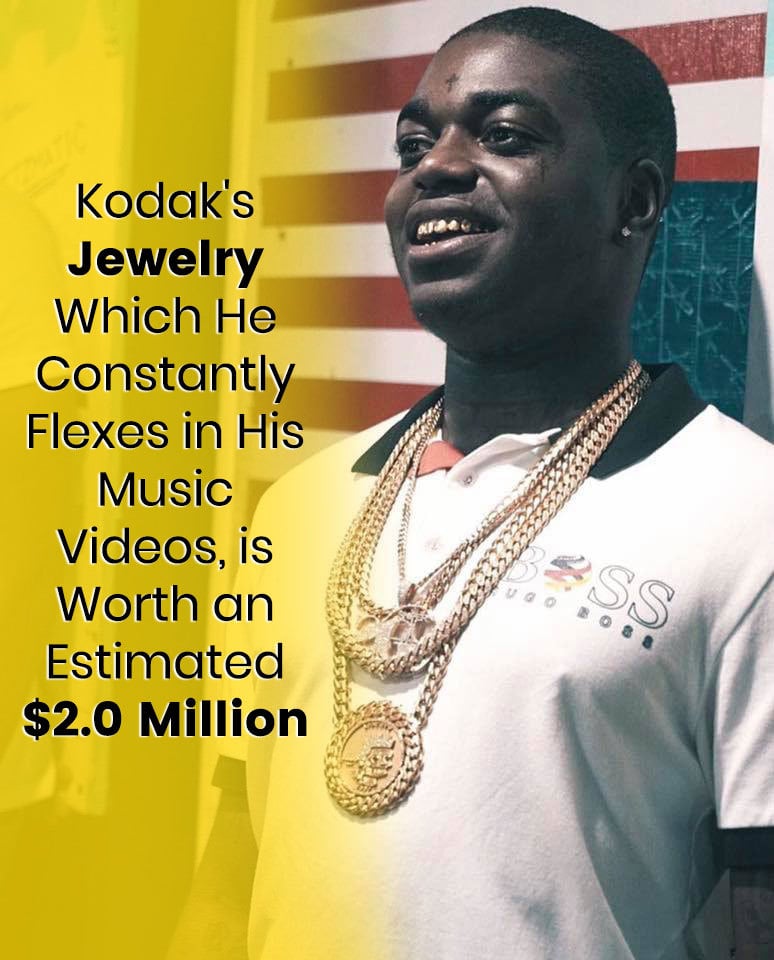 All of Kodak’s jewelry, which he constantly flexes on his Instagram and music videos, is worth an estimated $2.0 million. His collection also includes two watches that are bedazzled with gold and diamonds.

He also wears a chain with an “SG” Sniper Gang pendant containing 650 diamonds. In fact, Kodak replaced his gold grill and got permanent diamond teeth.

The rapper is often seen sporting rings, bracelets, and a Rolex watch. He also owns an Audemars Piguet solid gold watch with crystals.

Last year, it was reported that Kodak invested some money in a youth football league owned by a colleague.

On Instagram, Kodak announced that he had bought a midget team known as the Pompano Gators in the Flo-Rida owned Florida Youth Football League. No other details of the investment were made. In fact, the amount invested was also not mentioned.

Kodak is also often seen flexing a lot of cash on his Instagram posts—mostly stacks of $100 bills.

In one of his posts, Kodak showed that he had $5.0 million in his bag. He also had stacks of $100 bills around his bathtub.

Currently, the rapper is in jail serving his sentence on charges ranging from gun and drug possession to child neglect.

On April 17, Kodak struck a plea deal, which means that he will be in prison until September. It is unclear whether he will be releasing any singles or albums while in prison.

Here’s How Much Kodak Black is Worth Compared to His Contemporaries: