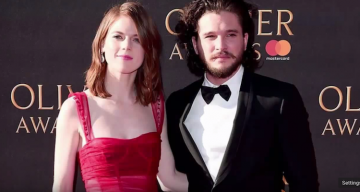 Who is Rose Leslie?

Rose Leslie’s age is 30 and she is the third of five children born to Rose Eleanor Arbuthnot-Leslie on February 9, 1987 in Aberdeen, Scotland. The Scottish actress later moved to London to continue her studies at the prestigious London Academy of Music and Dramatic Art (LAMDA). She’s also fluent in French, after living in France for three years.

They Met on the Set of Game of Thrones

If Leslie looks familiar to you then that’s because she played Ygritte, Jon Snow’s love interest on the show! She was featured in seasons 2 and 3, but later died in Jon’s arms after being shot with an arrow. They met on set and clearly their chemistry, like most actors, translated to real life and they began dating. They’ve been on and off before, but now tabloids and even more reputable publications have been speculating that Kit Harington has proposed to Leslie! One fact: the young power couple are currently living together! However, a few weeks ago, they shot down rumors of an engagement when stories began to surface that Harington proposed to her via a candlelit dinner.

She Has Her Own Show

If you thought Leslie’s career ended with Ygritte’s death, then you haven’t seen her latest role! Now, she stars on The Good Fight, a spin-off series of The Good Wife, available on CBS All Access. Leslie ditched her prehistoric clothes and upgraded to a more modern, corporate look in her role as Maia Rindell, a young attorney tied to a family scandal that involves a Ponzi scheme. Leslie’s character also gets a female love interest, but fans would agree that it’s just not the same seeing her without Jon Snow.

Leslie and Harington aren’t anywhere near the level of incest of GoT‘s Jaime and Cersei Lannister, but the young couple are both from noble households linked to British royalty! Many may not know this, but both Leslie and Harington are descendants of King Charles II. Harington was raised comfortably in West London as Christopher Catesby Harington to Sir David Richard, a businessman and now 15th Baronet, and Deborah Jane (née Catesby) a former playwright. He is the nephew of the 14th Baronet of Ridlington. Leslie was raised at Lickleyhead Castle in Aberdeenshire. Her father, Sebastian Arbuthnot-Leslie is the Aberdeenshire Chieftain of Clan Leslie and her mother, Candida “Candy” Mary Sibyl (née Weld), is the great-great-granddaughter of Simon Fraser, 13th Lord Lovat of Clan Fraser.

Sadly, Rose Leslie’s Instagram account doesn’t exist, but if you’re still looking for Rose Leslie’s hot pics, then you can search on the many fan-made accounts. It seems that people have a lot of time to post every picture of the happy couple, whether they know they’re being photographed or not!

So far, reps for Leslie and Harington have denied the engagement rumors but even Nicole Kidman urged Harington to hurry up and propose! What better peer pressure than an Oscar winner?