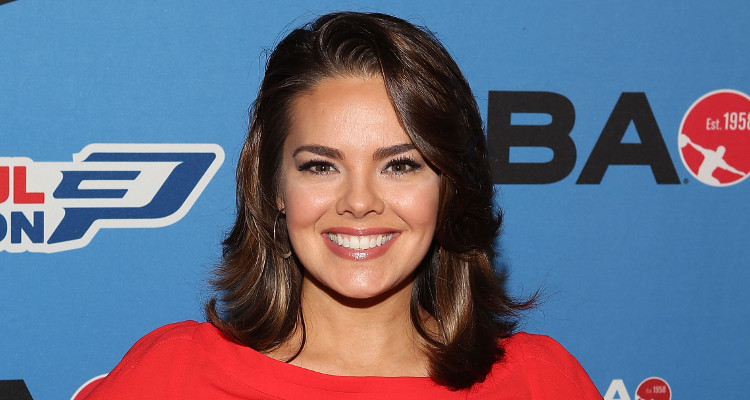 Kimberly Pressler was crowned Miss USA in 1999 and is now one of the most recognized personalities on ESPN. Here are all the details you need to know from Kimberly Pressler’s wiki.

From center stage to the sidleines, Kimberly Pressler is not one to shy away from a camera. Here are a few details you need to know about the 39-year-old reporter.

Another perk to working in Maine? My dad and step mom come to visit every time ? ? #daddysgirl #family #lularoerandy #maine

Kimberly Ann Pressler was born in Las Vegas Township, Nevada in 1977, which makes her age 39. Her father, Stan Pressler is a retired Air-Force Staff Sergeant and her mother, Michelle Pressler is a home-maker. Because her father was in the Air-Force, Kimberly spent her childhood bouncing around from Nevada, California, and Germany. Her family finally settled in Western New York, where Kimberly graduated from Ten Broeck Academy of Franklinville.

She continued her studies by attending Clarion University, in Pennsylvania, where she majored in International Business. From there, Kimberly worked for the Department of Energy (DOE) in a Nuclear Facility, located in New York.

In 1999, she competed for the Miss USA pageant, which was held in Branson, Missouri, and became the fourth woman from her state to win the Miss USA title. During her reign, Kimberly helped raise millions for breast and ovarian cancer research.

Kimberly competed to be Miss Universe 1999, but did not even reach the semi-finals. She is still involved in the pageant world. In June 2011, Kimberly was an honorary guest at the 60th anniversary of the Miss USA pageant held in Las Vegas, Nevada. Additionally, she was also the host of Miss Massachusetts USA, Miss Massachusetts Teen USA, and is also a regular judge at state pageants for both Miss Teen and Miss USA.

Her Career after the Miss USA Pageant

Since 1999, Kimberly Pressler has been active in the world of television. Besides, being a sports reporter and a television host, she was featured in TIME and People, and was on STUFF‘s “101 Sexiest Women in the World” list.

After being crowned Miss USA 1999, she worked for two years at MTV hosting shows like Senseless Acts of Videos, Fast and Famous, and Becoming. In 2003, she moved to NBC to host Adrenaline X.

In 2005, Kimberly started her career as a sideline reporter for ESPN’s “WPSA ATV Championships” and SPEED’s “WPSA Snowcross Championships” and the “Red Bull X Fighters” for three seasons (2006-2008). She even hosted the LIVE freestyle motocross competition. Additionally, she covered the “Summer & Winter X Games” live. Kimberly gave birth to a beautiful baby girl in 2009. After a short maternity leave, she hosted the “ACIS Fitness National Championships” for FOX College Sports, also reporting on the “Traxxas TORC Truck Racing” series (ABC & ESPN) and the U.S. stop of the “Red Bull X Fighters.”

Since 2010, Kimberly has been a sideline reporter for ESPN, covering the Professional Bowlers Association (PBA). The 2016-2017 season of the PBA Tour will be the 36th consecutive season on ESPN.