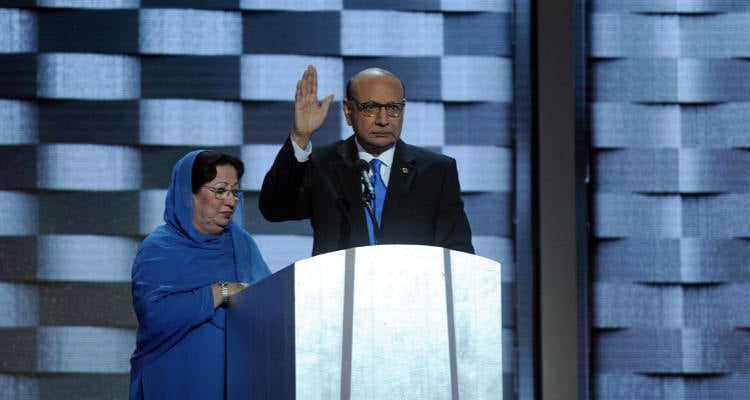 Until the 2016 Democratic National Convention began, nobody had heard of Humayun Khan and Khizr Khan. But today, the whole country is talking about them! So, who is Khizr Khan? He is the father of late U.S. Army Captain Humayun Khan , who died fighting for his country (the USA) in Iraq in the year 2004. People are wondering why Khizr Khan is in the spotlight now, in 2016. That’s because Donald Trump has involved Khizr in a war of words that seems to get uglier by the day. Trump picked the wrong person to do this with because Khizr is a lawyer by profession. Check Khizr Khan’s wiki page on the net.

Khizr Khan’s biography reads like a classic immigrant’s success story. He was born in Pakistan and was married to his wife, Ghazala Khan. Then, he moved to the United Arab Emirates for a few years before arriving in Boston, Massachusetts in the year 1980. There Khizr enrolled for a master’s program in law at Harvard University. After completing his studies, the family moved to Maryland where his son, Humayun Khan attended high school. Humayun joined the army and when he was called on for duty, he went to Iraq to defend his country against aggression. He died trying to save his unit from a suicide car explosion.

When Khizr was invited to the 2016 DNC to speak before the Democratic delegates, he didn’t know that he would tangle with Trump the way he did. Khizr Khan’s profession has seen him encounter many awful situations, but he had no idea that Trump would attack him and his son the way he did. At the DNC, Khizr Khan’s speech touched everybody’s heart when he spoke of how it was only in America that an immigrant like him could come and be accepted by the country. He spoke of the ultimate sacrifice that his son had made for the country that gave him everything. His wife, Ghazala stood beside him bravely as Khizr fought back tears while speaking of his son.

America is for Every Believer

Khizr was angry at Trump’s remarks about the Muslim community in America. He said that Trump has insulted several minorities, women and members of his own party with his ignorance. He held up his copy of the U.S. Constitution and dared Trump to admit that he had not yet read it. Khizr spoke of ‘liberty’ and ‘equal protection of the law’ that are enshrined in the constitution, and he asked Trump if he understood such noble ideals. Khizr’s speech ended with all the delegates giving him a thunderous approval.

Trump responded by attacking Ghazala Khan’s silence throughout her husband’s speech. He said that this only shows the lack of women’s rights in Islam. Trump’s comments have caused outrage in the sizable Muslim community in America, who have denounced Trump as being a bigot and a racist. The Trump-Khan war of words looks like it will continue, as both parties have dug in their heels and are not ready to surrender an inch. This spat is yet another example of the trouble caused because people don’t have clarity on what true Islam really is. It’s time that Muslims spell out the tenets of their religion that is at the center of so much controversy. On the other hand, Trump would do well if he chose his words a little more carefully. The USA needs understanding from all sides. The promise of America has never been under more threat than it is today.