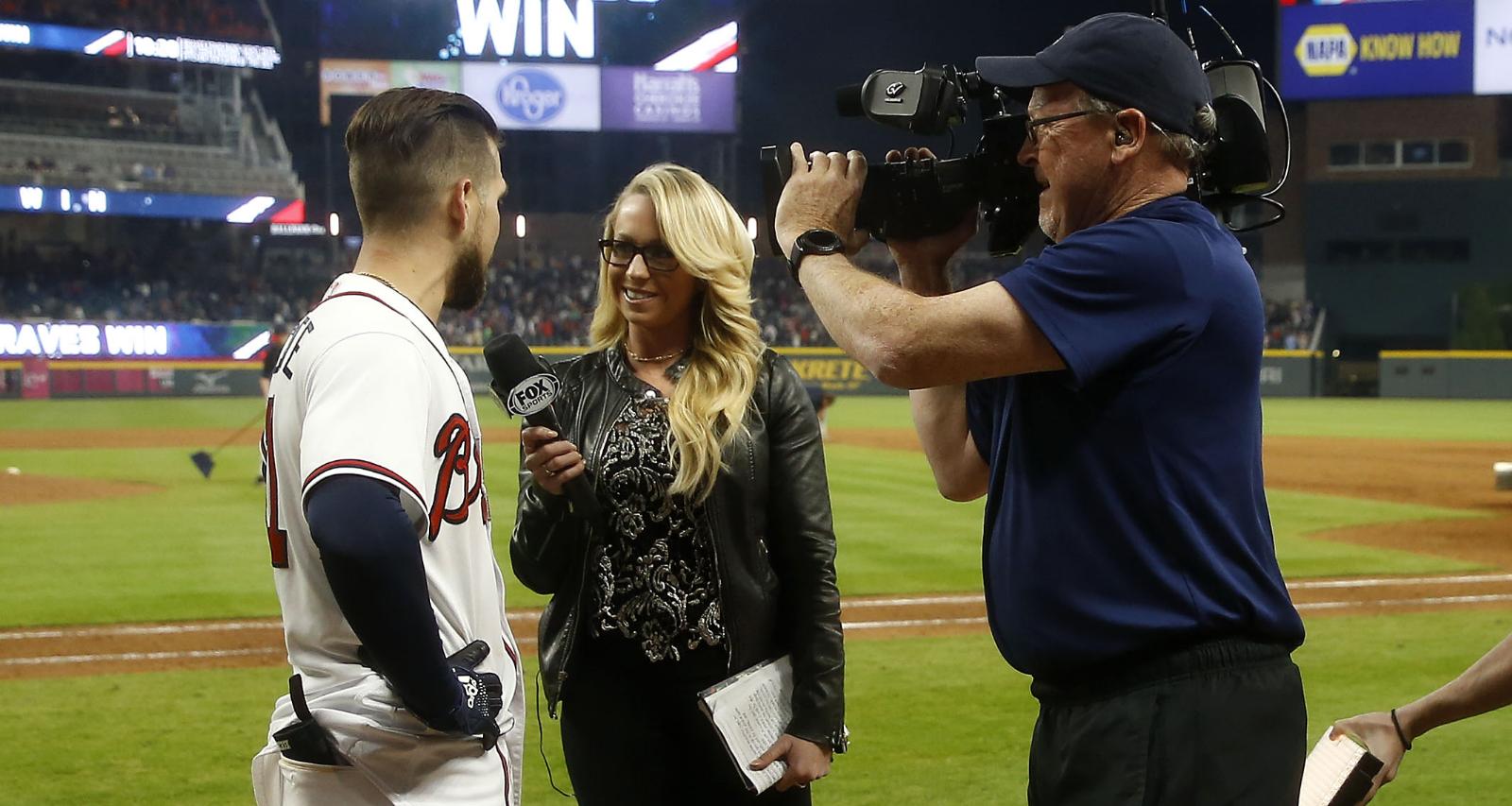 Atlanta Braves fans are more than familiar with the young and charismatic reporter Kelsey Wingert. The sidelines reporter for Fox Sports entered the Atlanta sports scene a few years ago and is making a name for herself with her enthusiastic work. Her star continues to rise, which warrants a Kelsey Wingert wiki to celebrate her career.

Kelsey Wingert was born on June 20, 1992, and is 26 years old. She hails from Sugar Land, Texas, but has lived in Louisiana, Florida, and now Atlanta, Georgia.

Her parents, Betsy and Greg Wingert, are originally from Pittsburgh, making the Wingert family Pittsburgh Steelers fans. Betsy has worked as teacher in Pennsylvania and Florida.

Kelsey graduated from Stephen F. Austin High School in Sugar Land in 2010. She went on to graduate with a degree in broadcast journalism with a minor in sports studies from Louisiana State University in 2014. While at LSU, she was the public relations chair for the Delta Zeta sorority.

My whole family is from Pittsburgh! Both parents were born there and majority of my family is still there.

She Was Working in Louisiana before Covering the Atlanta Braves

While in high school and college, Wingert worked part-time in local businesses. She’s wanted to work in sports broadcasting since she was in middle school, and it was while she was working on getting her sports journalism degree that she started building her experience in the field.

She started as a sports reporter for LSU-based Tiger TV for two years. She then returned to Texas to work as a sports intern at an NBC affiliate station in Houston.

Wingert worked with several broadcasters in Louisiana, including ESPN. She was even the LSU correspondent for ESPNU Campus Connection.

Wingert joined Fox Sports Southwest in 2015 as a field reporter for the Louisiana station. After graduating from LSU, she moved to Alexandria, Louisiana where she worked for NBC/CBS affiliate KALB-TV.

She wasn’t looking for a job while in Alexandria, but when an opportunity in Fox Sports opened up, she immediately jumped on it. Wingert moved to Atlanta when she bagged the job and has been covering the Atlanta Braves during MLB season since 2016.

She signed a new contract with Fox Sports South in March 2018 that will keep her on board as a Braves reporter for at least two years.

Some fun life news: I’ve signed a new two-year deal with @foxsportssouth. I can’t begin to tell you how much I love this job and how grateful I am for it. Now let’s play some #Braves baseball. #ChopOn

She Got Hit by a Foul Ball

Wingert has often said that her job as a Braves sideline reporter isn’t easy. Out of 162 games in a season, she’s covering 150.

She arrives at the stadium four hours before the first pitch and does pre-game, in-game, and post-game features. After the MLB season is over, she moves on to the NBA and NHL seasons.

You might envy her for getting the best seat in the stadium as a sidelines reporter. But the spot has its hazards, like runaway balls.

In March 2018, the Braves and Philadelphia Phillies were playing and Wingert was covering the game as usual, until the seventh inning. She was in the Braves’ first base dugout when Phillies center fielder Odubel Herrera hit a foul ball that went flying off the railing and hit Wingert square in her face.

It was initially unclear what happened, though a lot of spectators saw her holding ice to her face. Many had taken to Twitter to express their concern for Kelsey’s well-being.

Shortly after, Fox Sports analyst Paul Byrd provided an update on her via Twitter. He said that the foul ball hit her eye and she was taken to the hospital.

ICYMI, my Fox Partner @KelsWingert got hit in the eye with a line drive foul ball during the #Braves game. She is at the hospital now and is doing better. Continued Prayers & Support please for a safe recovery. She’s a GAMER!!!

Wingert provided updates on her Twitter the next day, revealing she had suffered a fractured eye socket. While expressing thanks for everyone’s concern, she also shared an image of her injury.

Back home. I have a fracture in my eye socket, but it could have been MUCH worse. I really appreciate all the tweets, calls and texts.

The Atlanta Braves wished her a speedy recovery, and also took precautions to ensure that it doesn’t happen again by adding more netting in the dugout.

Wingert’s parents flew to Atlanta to nurse her back to health. She was back in the ballpark in a few days, covering the Braves game in the snow with some nifty makeup to cover the bruise.

If you’re wondering if her eyesight was affected by the accident, she hasn’t revealed so. She wears glasses on air often, but she had the glasses to read graphics on the monitor long before the accident.