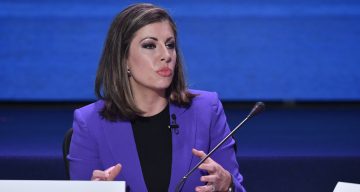 Proud Floridian and Fox News political and financial advisor Morgan Ortagus has suddenly become a Google search trend, following her recent The Five episode about President Donald Trump’s impeachment. Apart from being a devout Republican, she’s also questioning the Democrats’ interest in stirring up what could be a whole circus for the impeachment, sparking a buzz on the Internet.

This Morgan Ortagus wiki reveals more about her service to the country as a U.S. Navy personnel, her red wedding gown, and her amazing career in politics and TV. Did you know Ortagus has a twin sister named Megan? Here are some more interesting tidbits from Morgan Ortagus’ bio you need to know!

Morgan Ortagus Is from Florida

Born on July 10, 1982, Morgan Ortagus’ age is 35. She was born in Auburndale, Florida, and is a true-blue Floridian who won the Miss Florida Citrus crown way back in 2002.

Her parents are Denise C. Ortagus and Ronald E. Ortagus, and she has a twin sister named Megan.

Ortagus is not very keen on talking about the Miss Florida Citrus title, and in an interview with the New York Post back in 2006, she said that she doesn’t like to advertise it.

She went to Florida Southern College and graduated with a Bachelor of Science in Political Science in 2005.

She then completed her Masters of Administration at Johns Hopkins University, and is also an MBA graduate from the Carey Business School at JHU.

She said she wanted to get through school and needed scholarships, and the title helped her with her college tuition.

“I don’t think I’m that interesting,” she told the publication, somewhat undermining her personality.

Thank goodness her fans don’t feel the same! Today she is a well-known host and political anchor on Fox News and known as one of the most accomplished TV personalities around.

Had to get my #selfie in with the new @missamericaky #judgelife #misskentucky I ❤️ judging state pageants!

She joined as McFarland’s press secretary in 2006 when the former Deputy National Security Advisor was a U.S. Senate candidate. It was for a brief period of time, after which Ortagus joined the United States Agency for International Development in 2007 and spent a lot of that year in Iraq. She met several important people during that time and even celebrated Hanukkah at Saddam Hussein’s palace.

In 2008, she became an Intelligence Analyst for the U.S. Treasury in the Office of Intelligence and Analysis, where she was majorly active in North Africa and the Middle East.

By 2010, Ortagus’ work took her to Riyadh, Saudi Arabia, where she was sent as a Deputy U.S. Treasury Attaché. She spent her time there trying to identify and halt any illegal flow of finances from the Kingdom.

One of the craziest things happened last night: I randomly ran into a Marine officer with whom I spent Hanukkah in Baghdad in Saddam’s palace in 2007. We haven’t seen each other in 11 years, and it took us an hour of talking before we even pieced it together, that we were together in the Green Zone. After we figured it out, he had these pictures of me in Baghdad still on his computer and sent them to me. He also happens to be best friends with one of my best friends from the Navy! What a small world. I still can’t believe it happened. #baghdad #greenzone

Their strong network of connections, which together include White House and Treasury Department as well as Wall Street and Silicon Valley, helped them bring forth a business model that was seen as lacking in the industry.

She is also the national co-chair of Maverick PAC, an executive director at Ernst & Young, and she built EY’s Geostrategic Business Group where she remains a Senior Advisor.

She is a national security analyst and Republican strategist who is best known for her appearances on Fox News’ Fox & Friends, The Five, and Outnumbered.

After we took this picture I walked to @chickfila and stuffed my face! ? As always, love guest hosting @outnumberedfnc @foxnews with my dear friends @nicolesaphier_md and @dagenmcdowell @kennedynation

Ortagus and Jonathan Weinberger married on May 25, 2013, but it looks like Weinberger proposed to her in 2010. In a recent tweet, Ortagus posted a photo of the couple at a White House event, captioning it, “He proposed to me in the rose Garden at the WH 8 years ago! Happy Hanukkah!”

@WhiteHouse #Hanukkah party with my Love @jrw611 He proposed to me in the rose Garden at the WH 8 years ago! Happy Hanukkah! #republicanJews pic.twitter.com/ryKPorXxkg

This is Ortagus’ second marriage, as she was previously married to a man named Josh Dobbs. Though the reasons are undisclosed, it is reported that Ortagus’ first marriage ended in a divorce.

Morgan Ortagus was 30 when she said “I Do,” while Weinberger was 36. What made the wedding so unique was the bride!

She took her vows in the chambers of Associate Justice Ruth Bader Ginsburg at the Supreme Court in Washington, D.C., where the justice officiated the ceremony.

Later that evening, the couple also had a Jewish ceremony that was led by Rabbi Kenneth B. Block.

Ortagus’ husband of five years also worked as an executive secretary for the U.S. Treasury in D.C.

Ironically, he is also a graduate of Johns Hopkins University. He is a law degree graduate from American University and went to Georgetown for his Master’s of Law in International Finance degree.