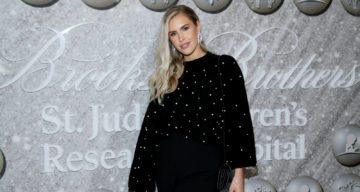 Olympic swimmer, Ryan Lochte, seems to be all set in his life. With a booming swimming career and a beautiful girlfriend, it seems like he is finally ready to delete his Tinder account. If you are wondering about Ryan Lochte’s girlfriend and are searching for Kayla Rae Reid pics, then you have come to the right place because we will provide you with all the details and photos right from Kayla Rae Reid’s Instagram account!

The 32-year-old swimming champion is making waves with his outstanding performance at the 2016 Rio Olympics. However, very little is known about his dating life, and with the hots like his, you know people are wondering! If you also have questions like, who is Ryan Lochte’s girlfriend? Or who is Ryan Lochte dating? Then you need to read on as we uncover the mystery behind Kayla Rae Reid and Ryan Lochte!

Who is Ryan Lochte’s Girlfriend?

If you take a look at Kayla Rae Reid’s pics, then you will see that she is a professional model. She was born on July 5, 1991 in Fairfax, Virginia, U.S.A. The 5 ft. 7 inches Playboy model was the Playmate of the month for July 2015. At the age of 10 she moved to Palm Springs, California. She was interested in modeling since she was very young and pursued cheer-leading when she was in college, in order to enter the entertainment industry. After completing her studies, she worked for the Monster Energy Family as a Monster Girl.

Ryan and Kayla started dating in March, although it was not made official. But last week on Ryan’s birthday, Kayla wished him a happy birthday by calling him her “favorite person on the planet” and “a silver fox.” (And in case you’re wondering why the name “silver fox”, Ryan recently dyed his hair an icy-blue/silver tone.) Before they started dating, Ryan was asked about what his ideal type of girl would be, to which he said, “Honestly, if she can make me laugh, then I’m pretty much sold,” he said. “If she’s not funny, she’s taking life too seriously and that’s definitely not how I live my life. I have fun in any aspect of life.”

He further added, “I’m an Olympic athlete, and there are a lot of demands I have that go on in my life,” he said. “I’m always on the road. If [women are] always depending on me to help them, or they’re not independent, that’s a big turnoff.”

It has just been five months since the couple started dating and he has already introduced Kayla to his family! In fact, Kayla even flew down to Rio de Janeiro to cheer and support her 32-year-old Olympic man! That’s dedication! According to Ryan’s Instagram account, he is preparing for his upcoming races. He recently competed against Michael Phelps in the 200-meter individual medley on Wednesday and he may also compete in other team relays throughout the Games.

Best of both worlds! Getting an ab workout WHILE I do some yoga with my new @theflexbelt. Go buy one now over on the link in @theflexbelt bio with my code KAYLA #flexbelt #ad

The couple has not kept their love life a secret and they both love to upload photos on their social media accounts. Ryan has also come up with a nickname for the couple, which is Rayla. In one of his interviews in March, he spoke about his stable relationship. The pair even go for trips and recently celebrated Cinco de Mayo together. During the 2012 London Olympics, Ryan’s mother Ileana gave an interview claiming her son goes out for one-night stands and further said, “He’s not able to give fully to a relationship because he’s always on the go.” However, Ryan later clarified the news by saying, “They took it out of context. My mom is really new to all of this and the media. She meant since the last 4 years I just wanted to focus on swimming, and I didn’t really have time for a relationship.” Well, it’s nice to see he’s settled down now with a beautiful woman, and we wish the two the best!

If you want to learn more about the studly American swimmer, check out our Ryan Lochte Wiki!