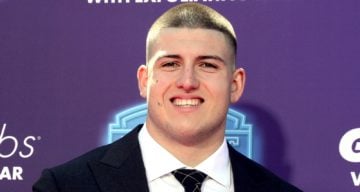 Purdue Boilermakers defensive end George Karlaftis fulfilled his dream to become a first-round pick in the 2022 NFL Draft. The Kansas City Chiefs signed the Greek athlete who also brings a new WAG to the franchise. Kaia Harris is George Karlaftis’ girlfriend and motivation, and together, they are #RelationshipGoals. Harris has an athletic background, too, and she’s overcome a lot to keep playing. Karlaftis even credits her as his inspiration to achieve his pro-football dreams. We reveal more of their story in this Kaia Harris wiki.

Kaia Harris was born in 1999 and is a native of West Lafayette, Indiana. She is the eldest of five children born to Cindy and Courtney Harris.

Her father, Courtney, is a director of business development at Purus Labs. Her mother, who goes by Cindy Gong-Harris, is also in a similar role at OptoSigma.

Kaia Harris is a student-athlete who graduated from West Lafayette High School in 2017. In high school, she played basketball and was also a discus thrower on the track and field team.

She stuck to discus throwing when she went to college. She initially attended the Air Force Academy, but later transferred to Purdue in 2018.

Harris was on the Boilermakers roster from 2018 to 2021. She has managed her athletics while pursuing marketing and kinesiology with a minor in Spanish, and also overcoming injuries and accidents.

Kaia Harris is expected to graduate this year. Meanwhile, she has gained experience as a part-time marketing assistant working under her mom at OptoSigma. She also had an internship there and another at Caterpillar Inc.

Purdue athletes George Karlaftis and Kaia Harris are low-key on social media and don’t share much about their relationship. So it surprises the Greek-born footballer’s new fans to find out that they have been together for five years as of 2021.

Karlaftis moved to West Lafayette from Greece after his dad passed away suddenly. Besides football, he was also a shot-put champion on the track and field club.

He met Harris in his freshman year of high school, and they instantly hit it off as friends. A few months later, they were officially dating.

While Karlaftis gets most of the attention, he turned the spotlight on their relationship last year. Harris went through a difficult time and is an inspiration to her boyfriend for how she handled it.

In November 2019, Harris was driving home after seeing the Purdue vs. Northwestern game. Karlaftis called her to check on her only moments before she was run off the road by another car and then hit by another semi-truck.

“It was crazy seeing the person you love in that kind of state,” Karlaftis said about seeing Harris’ condition in the hospital right after the accident.

Harris suffered severe injuries to her pelvis and internal organs in the near-fatal car accident. Karlaftis said a week after the accident, she would communicate by drawing letters on someone’s hand.

She went through multiple surgeries, was unable to walk for two months, and spent over a year recovering to get back to discus throwing. Within two months of her return to competition, she qualified for the NCAA postseason. She also finished her full course load and classes.

Karlaftis was by her side the entire time—the same way she had always supported his athletic career. He’d see her in the hospital after practice and would do his studies in the car in the parking lot.

“She overcame one of the most difficult obstacles out of anyone I’ve ever seen … and that just is so inspirational,” Karlaftis said about his girlfriend.

Kaia Harris was among George Karlaftis’ loved ones cheering him on at the 2022 NFL Draft. Chiefs fans are ecstatic to welcome this young WAG along with the defensive end to the franchise.