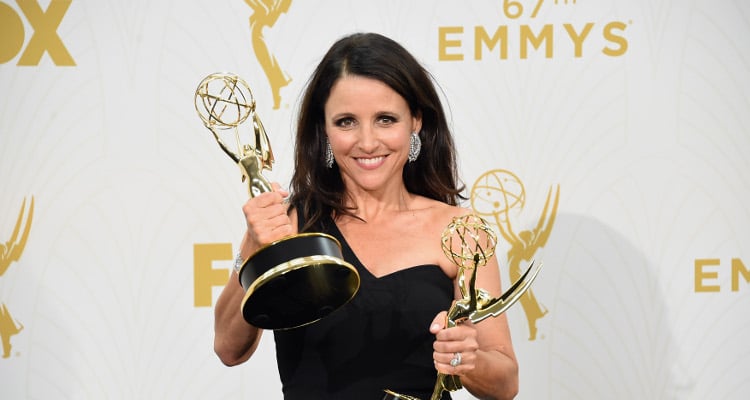 The stunning actress announced that she was among the many women who are battling cancer. Since news of Julia Louis-Dreyfus’ breast cancer diagnosis broke, she received nothing but positivity and support from everybody. Keep reading to know all about her, including Julia Louis-Dreyfus’ net worth in 2017.

Julia Scarlett Elizabeth Louis-Dreyfus was born on January 13, 1961, in Manhattan, New York. She has a long history of businesses to her family name. Her great-great-grandfather, Leopold Louis-Dreyfus founded the Louis Dreyfus Group, which is a French conglomerate of shipping and commodity services.

Her father, Gerard Louis-Dreyfus chaired the Louis Dreyfus Group until his death in 2016. Before he took over the company, his father, Pierre Louis-Dreyfus was chair until 2011. Julia Louis-Dreyfus’ paternal grandmother was born in the United States, so her grandfather moved from France and settled in New York.

Julia Louis-Dreyfus’ father met Judith Bowles and married her in 1955. The actress was born to them six years later, but her parents split up a year later in 1961. Louis-Dreyfus lived with her mother and stepfather, L. Thompson Bowles after they moved to Washington D.C. The Bowles had two daughters, Phoebe and Emma who, according to sources, got along well with their older half-sister.

Julia Louis-Dreyfus spent most of her childhood in different states and countries, as she moved with her family due to her stepfather’s work in the medical field. He was a part of Project HOPE, which took them to Vietnam, Columbia, and Tunisia.  She went to Holton-Arms School in Maryland, and attended Northwestern University, but quit to take up professional acting.

My Mom (photo circa 70's) has just written an excellent book of poetry. Go to Amazon & check out The Gatherer by Judith Bowles

When Julia Louis-Dreyfus began her acting career, she appeared at The Second City as part of her training. They were the best when it came to improv theater, and she was a part of the group which proudly associated with the likes of Tina Fey, Stephen Colbert, and Steve Carell.

It was in 1982 that Louis-Dreyfus gave her life-changing performance at the Practical Theater Company’s Golden 50th Anniversary Jubilee. It helped her get on the set of Saturday Night Live when she was just 21 years old, making her the youngest female cast member back then. She appeared alongside big names like Eddie Murphy, Billy Crystal, Martin Short, and many others. And, it’s safe to say that she learned from the best during her time there.

Louis-Dreyfus was more than dedicated to her work. And although at times she claimed she was in the unknown waters of sketch-comedy, she sailed through smoothly.

With roles in a string of movies like Soul Man and Hannah and Her Sisters, she proved to everybody that she was a great comedy actress. But nowadays, she is mostly known for her role as Elaine Benes on the sitcom, Seinfeld.

The hit show aired in 1989, and Louis-Dreyfus was a major part of all nine seasons as Jerry Seinfeld’s friend. She auditioned for the role alongside Patricia Heaton, Megan Mullally, and Rosie O’Donnell, who each became successful in their own shows later.

The show was a huge success, despite strong competition by Friends, which was a mega-hit when it came to ‘90s sitcoms. Julia Louis-Dreyfus’ role on Seinfeld was initially not scheduled to be a major part of the show, but later the writers changed their minds.

Seinfeld ran for a full nine seasons until 1998. But Julia Louis-Dreyfus did not stop working for a minute. She immediately began doing voice-overs for A Bug’s Life and even The Simpsons.

30 years ago today this happened. So far so good.

It had been a while since she was on TV full-time, and she re-entered the industry with Watching Ellie in 2002. The NBC show was created by Brad Hall, who married Louis-Dreyfus in 1987. She was cast alongside Steve Carell, and the show had decent  ratings during its time on air.

Julia Louis-Dreyfus’ fans are crazy about the actress’ comedic timing, not to mention her great screen presence. She contributed to the comedy genre with more than amazing roles and performances. Even these days, she’s winning awards and breaking records.

Here are the top five mention-worthy awards that Julia Louis-Dreyfus has won over the years:

The multiple award-winning actress has made a huge contribution to comedy in Hollywood, and she’s a fairly wealthy woman. It is estimated that Julia Louis-Dreyfus is worth a whopping $200.0 million!

She receives a salary of $150,000 per episode of Veep. As she comes from a wealthy family, her grandfather’s net worth was estimated at $4.0 billion!

Here’s a breakdown of Julia Louis-Dreyfus’ net worth: