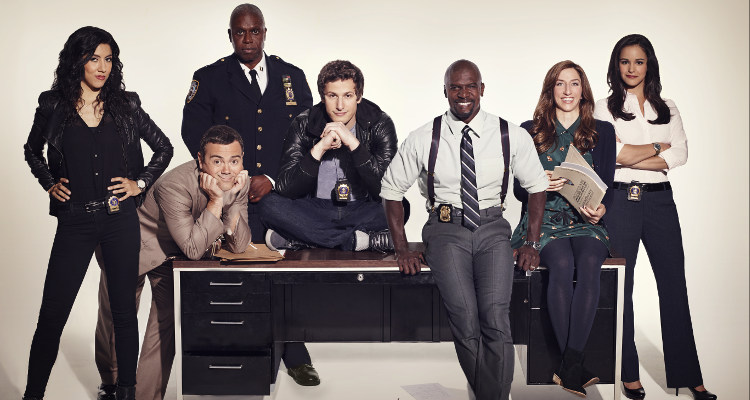 When the whole squads outfits are on point. #Brooklyn99

#1 Detective Jake Peralta (Andy Samberg): Jake is fun-loving and childish in nature, although he has the best arrest rate in the nine-nine precinct. He is remarkably talented at his job and has a keen intuitive sense. Jake is always cracking jokes and pulling pranks at his colleagues’ expense, especially Amy, with whom he eventually begins a relationship. The two move in together, before Jake is placed under witness protection, and relocated to Florida.

#2 Det. Rosa Diaz (Stephanie Beatriz): Rosa is a tough-as-nails detective, who struggles with anger management issues. She is smart as a whip, but always maintains an aloof persona among her colleagues. Rosa often shocks her fellow detectives with her lack of feeling and empathy. Later, she gets engaged to an undercover detective named Adrian Pimento (Jason Mantzoukas).

#3 Sergeant Terry Jeffords (Terry Crews): Terry is the experienced and caring supervisor of the detective squad. He is high-strung and frequently refers to himself in the third person. Terry is a devoted family man and dotes on his wife and two young daughters. The source of his nervous excitement is his fear that he will leave his daughters fatherless if he ever dies in the line of duty.

#4 Det. Amy Santiago (Melissa Fumero): Jake’s partner and girlfriend, Amy is uptight and known for being a teacher’s pet in the precinct. A perfectionist by nature, she is often the butt of her colleagues’ jokes due to her erratic nature. In complete contrast to Jake’s clownish behavior, Amy is a stickler for the rules.

#5 Det. Charles Boyle (Joe Lo Truglio): Jake’s best friend in the precinct, Boyle is a kind and honest man, who always bails Jake out of trouble. He is hard-working but clumsy in nature, and is Jake’s partner in crime. He harbors a secret crush on his colleague Rosa, and is a die-hard foodie.

#6 Gina Linetti (Chelsea Peretti): Gina is the narcissistic and egotistical civilian administrator at the nine-nine precinct. She maintains a dimwitted disposition, but frequently surprises her colleagues with her intelligence and observant nature.

#7 Captain Ray Holt (Andre Braugher): The robotic captain of the nine-nine precinct is known for his lack of expressiveness. He speaks in a monotone and maintains a calm and collected disposition at all times. Holt is gay and happily married to a Columbia professor. In the season 3 finale, he is forced to relocate to Florida, after being placed under witness protection along with Jake.

What are your plans this weekend? #Brooklyn99