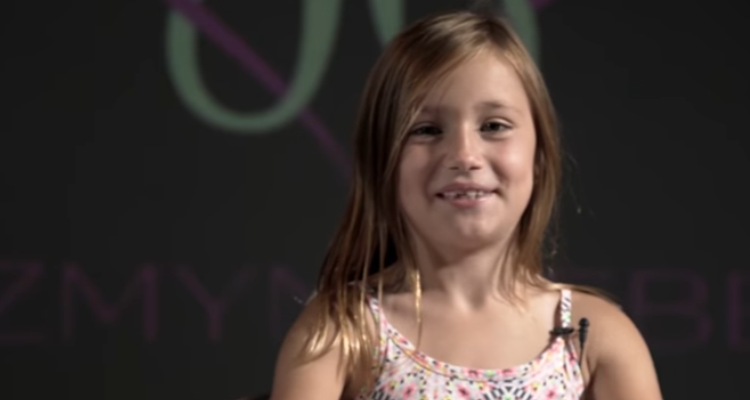 Justin Bieber is currently on tour giving fans the show of a lifetime, but many want to know about a different Bieber, his half-sister Jazmyn Bieber. Some fans of the Canadian didn’t even know he had a younger sister and have been curious to know more about her. If you are curious to know more about Justin Bieber’s sister, then have a look at our Jazmyn Bieber wiki, right here!

Not everyone knows about Justin Bieber’s siblings, since the 22-year-old megastar gets the majority of the spotlight— but he’s not one to shy away from sharing the spotlight, either. She may only be an eight-year-old girl, but Jazmyn has accomplished a lot for someone her age. We’ve got all the details you need on the teen sensation’s adorable little sister, so keep reading to learn more!

Jazmyn Bieber’s birthday is May 30, 2008 and she was born to parents Erin Wagner and Jeremy Bieber. She has two brothers; a full brother named Jaxon, and of course, the Biebs himself, who is in fact her half-brother. She was raised in Stratford, Ontario and was given the nickname “Jazzy.”

Also Read: Justin Bieber’s Net Worth: The Biebs’ Years in Numbers on His 23rd Birthday

Believe it or not, Jazmyn already has her very own YouTube Channel with over 176,000 subscribers! Her channel has an elaborate opening trailer, where she wakes up and takes a child-size ATV toy and drives it across her family’s large field, transfers to a golf cart and then an SUV (complete with a costume change) and then runs into her “office.” It’s the kind of opening that reminds us of Live with Kelly! The opening video has well over a million views! She may just be a kid, but it’s clear that Jazymn wants in on the family business, and bu the looks of it, she’s already blossoming into a young starlet herself! It also doesn’t hurt that Justin gave her a shout out to promote her new YouTube Channel! Check out her very own trailer for her channel below!

“My sister has a YouTube channel,” he wrote on Facebook and Twitter earlier this week. “Proud of you Jazzy.” The post liekly garnered Jazzy a plethora of new following based on his celebrity status alone. There’s nothing like free advertising from your worldwide famous brother to boost your popularity!

Her Brother’s On Tour

Jazmyn was backstage on Justin’s Purpose tour last year and he’s on tour once again this year, from April 5 to September 6. While everyone may think they are the biggest Beliebers on the planet, something tells us Jazmyn has already won that title!

By the looks of it, Jazmyn is not only an upcoming media personality, she’s also Kids Ambassador to KidsWifi, a company geared towards giving kids a safe Internet experience. KidsWifi filters mature content that isn’t meant for children and can be remotely activated. It can also affect any device of a child who is visiting a home that has the feature enabled. It also has an automatic timer that turns off a child’s Internet, forcing them to get ready for bed time! We can only imagine how many parents need this device.

At Heffner Toyota @kidswifidotcom here's me 😜

Jazmyn does have an Instagram account, but it happens to be run by her parents and her management. There are also quite a few fan-based Instagram accounts dedicated to Jazmyn with many adorable pictures of the budding star. She’s just a kid, but we imagine we’ll see her gain a bigger social media presence as she grows!

YouTube star and entrepreneur—Jazmyn has more job titles at eight than most people do at 30! We wouldn’t be surprised if she became a CEO of her own company at age nine! Keep your eye out for this one, she just might follow in her big brother’s footsteps and become a worldwide sensation!