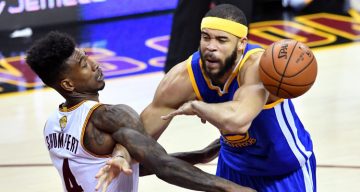 The Golden State Warriors defeated their longtime rivals, the Cleveland Cavaliers, in the NBA Finals last night. The players’ families joined them to celebrate after the win. JaVale McGee brought his baby to celebrate, but where is his baby’s mother?

In a historic Game 5 of the NBA Finals, the Golden State Warriors won against the Cleveland Cavaliers, with a score of 129-120. The Warriors are in celebratory mode now, especially JaVale McGee. The seven-foot tall player was seen celebrating with his baby girl. Before the game, his girlfriend and baby’s mother was cheering him on, and it looked like all those well wishes paid off! So, who is JaVale McGee’s girlfriend and the mother of their daughter? Find out right here in Giselle Ramirez’s wiki.

There’s very little information available on Giselle Ramirez, but we learned a few things about her from her social media accounts. According to her Instagram bio, she is a real estate professional. She grew up in Los Angeles and specializes in properties in the LA County. She represented the actor, writer, and producer, Damien Dante Wayans when he put up his house for sale.

In 2015, McGee bought a new home worth $2.4 million. The Mediterranean-style abode in Encino with a billiards room, home theater, wine room, swimming pool, spa, pool house, gazebo, and fire pit was previously home to Marc Anthony. Giselle Ramirez represented McGee in this purchase. While there’s no record about how the couple met, this was perhaps it.

Thank you for my lippy gloss baby Nova @jnovacollection ???

The Latina mentions in her Instagram she is from El Salvador and is fluent in both English and Spanish. She graduated from UCLA where, according to reports, she pursued two degrees.

Ramirez used to work in sales and operations while managing a media company. She also did some modeling and shot a photo spread with Milan Carter.

#3. They Have a Daughter

JaVale McGee and Giselle Ramirez are parents to a beautiful little girl. They haven’t revealed her name but they have no inhibitions showing off just how adorable baby McGee is! The proud parents have their respective Instagram accounts full of pictures of their daughter dressed like the cutest little fashionista that she is. We think mini-McGee gets her fashion sense from her mom. Just check out Ramirez’s Instagram and you’ll agree!

The couple hasn’t tied the knot yet but perhaps we’ll hear wedding bells in the near future as JaVale McGee has already decided who’s going to sing at their wedding. The basketball player once told a reporter that he’d like R. Kelly to sing at his wedding —if he ever gets married. But before that, McGee has got to put a ring on it!

It's okay baby we got 'em back home ?? #warriors #goldenstatewarriors #mcgee