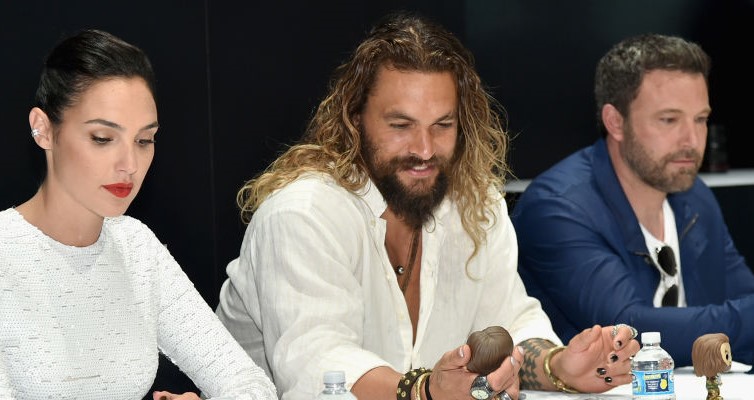 The Harvey Weinstein scandal heard around the world only seems to be picking up steam. In a resurfaced 2011 Comic Con video, Jason Momoa’s “rape beautiful women” comments came to light. What did Jason Momoa say? Keep reading if you want to learn more about Jason Momoa’s rape comments.

Jason Momoa’s Game of Thrones character, Khal Drogo, was a Dothraki soldier. The Dothraki are known to be the best warriors but are also known as a tribe of rapists. Khal was married (technically sold) to Daenerys (Emilia Clarke) early on in the series. His character forces himself on her several times, later depicting her as someone who’s trying to please her husband. They later fall in love and she gets pregnant before he dies.

In a 2011 San Diego Comic Con panel, Momoa, now 38, answered an audience question saying, “As far as sci-fi and fantasy go as a genre, there is so many things you can do… like rape beautiful women.”

The crowd laughed while Momoa’s GoT co-stars put their heads down and covered their faces. Why? Because like most people who watched the cringe-worthy clip, it was considered a bad joke, despite the audience’s reaction.

Not too long after the comments were made (and too late to take back), the Game of Thrones star didn’t exactly apologize, but decided to set the record straight.

“I’m not a rapist!,” he said to the New York Post in relation to his GoT character. “I prefer my women to enjoy sex. Unfortunately, the internet is not so forgiving.”

The Internet wasn’t very forgiving then and it doesn’t appear to be now. The Aquaman star is being dragged and collected by many on social media and he’s not the only member of the Justice League who’s past has come back to haunt him. Batman star, Ben Affleck also has a video that recently surfaced, showing him in his 30s as he grabbed One Tree Hill star, Hilarie Burton‘s breast. It was before she started acting and it was caught on MTV’s TRL, which she hosted with Power actress, Lala Anthony. Affleck, who condemned Weinstein, apologized on Twitter but is now being accused of grabbing another woman! Makeup artist, Annamarie Tendler recently claimed that Affleck grabbed her ass at a Golden Globes party in 2014, according to Entertainment Tonight.

“I would also love to get an apology from Ben Affleck who grabbed my a** at a Golden Globes party in 2014,” Tendler claimed. “He walked by me, cupped my butt and pressed his finger into my crack.”

“I guess he tried to play it like he was politely moving me out of the way and oops touched my butt instead of my lower back?” she continued. “Like most women in these situations I didn’t say anything but I have thought a lot about what I’d say if I ever saw him again.”

Jason Momoa’s wife is actress Lisa Bonet and they have a son and daughter together.

It may be a shock for fans to see Jason Momoa in the news for something like this, especially because those who follow the GoT star know that he is a man of great integrity. One look at Jason Momoa’s Instagram and you will see that he lives his life to the absolute fullest and has the strongest love and bond with his kids. He lives for the outdoors and cherishes God for the life he’s been given, as he thanks and praises him in most of is posts. It tough to see someone with such strong morals make the mistake of trying to make a joke out of a very serious matter, and of course, some were highly offended by his remarks.