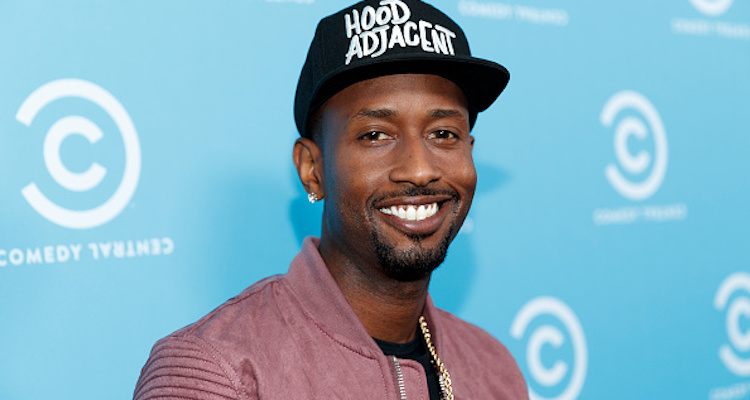 James Davis has a unique perspective on life because he grew up at the intersection of the tough living in the hood and the rich expanses of wealthy golfers. He uses this ability to find a funny side to even the direst of situations. He wants to give the real picture of black urban life today even as others peddle stereotypes.

Hood Adjacent, a new show featuring James Davis, the comedian, is alredy a winner. In the first episode of the show, which premiered June 28, 2017 on Comedy Central, the comedian says, “On Hollywood Boulevard, there are actually people paying money to go on a tour of the hood.” Davis, who is trying hard to portray the realistic side of the hood, finds a problem with these arranged tours because, “These tours are bringing people to see a stereotype first hand. I‘m bringing people to see a side of the hood they haven’t seen.” Hood Adjacent with James Davis mixes stand-up comedy with pre-taped sketches and field pieces, and both educates and entertains its audience. People are getting to see more of the comedian first hand. Keep reading for are some details from James Davis’ wiki.

Where is James Davis from? According to the comedian himself, “I’m from South Central —but not that South Central. I’m not from the Menace II Society, Boyz n the Hood part of town…When the riots happened, I could smell it but I couldn’t see it.” Davis is an actor, writer, and stand-up comedian who had a recurring role on Real Husbands of Hollywood as well as the improvisational comedy show, Wild N’ Out on MTV2. Davis is also known for his music video for “Baraka Flaka Flame.” He is known for his work on shows such as Hell Date and Bill Bellamy’s Who Got Jokes. As a writer, Davis is in demand and has written for the BET and BET Hip Hop Awards.

Davis has hosted rap and comedy concerts for well-known artists like Big Sean, J. Cole, Drake, and Ryan Leslie. He all travels all across southern California performing for stand-up comedy troops, colleges, and major comedy clubs. Making people laugh is a standard achievement for Davis, who released numerous sketches and is a regular performer on Funny or Die. He loves playing golf and uses it as a metaphor to explain his unique background.

View from the Middle

Davis grew up at the intersection of two very different walks of life, and “straddled two worlds” his entire life. On one side, he lived a block away from the dangerous South Central area of Los Angeles, California, while spending hours at the golf course playing and even taking lessons at the Riviera Country Club. He got a golf scholarship to study at Hampton University, but turned it down to attend Pomona College. Davis says, “My perspective is somebody who is a bridge between two different worlds and I go and talk about topics as someone who can explain it to both sides.

Proud of His Identity

There is no information on James Davis’ net worth, but considering the extensive work he has done on TV, it must be healthy. After all, he has made excellent strides in his career! There is no information about James Davis’ girlfriend either, so we cannot confirm if he is single or not. He credits his mother for getting him to appreciate who he is, and where he comes from, “My mom wanted me to be around black people. I always felt at home. I knew the people on my street.” Today, Davis is regaling his audiences with his witty jokes while at the same time educating them about the black culture he is proud of.