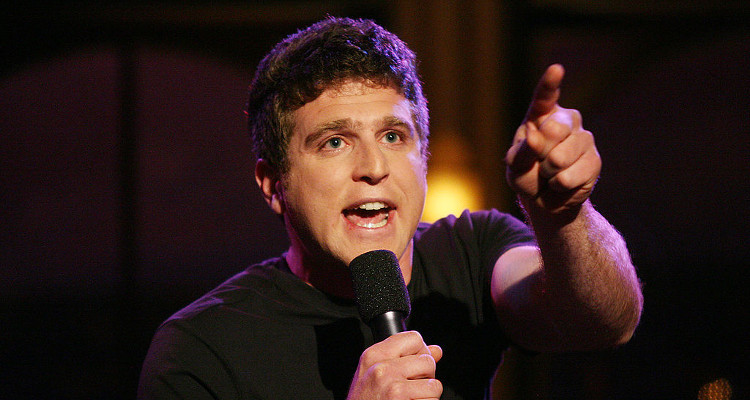 It was a twist of fate that made Mo Mandel become a stand-up comedian, because he originally wanted to be a novelist. So the literary world’s loss became comedy’s gain. Mandel has become famous thanks to his active hosting and acting career. It was his win at a national talent competition where he got his first gig on Comedy Central. His audiences have not stopped laughing since.

Mo Mandel has a problem: He just can’t stop making people laugh! After college, Mandel started doing stand-up comedy routines, something he ended up being a natural at. While waiting for his big break, Mandel worked as a bartender. One day, he got a call one day while at work saying that he had won a national talent competition, landing him a gig on Comedy Central. This paved the way for Mandel to do more comedy shows, and branch into acting as well as hosting his own shows. People want to know more about him, so we have some details from Mo Mandel’s wiki.

Also Read: Leslie Jones Net Worth: How Rich is the “SNL” Comedian?

Born on April 6, 1981, in Boonville, California, Mo Mandel’s age is 36. His father wanted to name him “Mohahn” thinking it was a Jewish name but later found out that it was actually Hindu. Mo Mandel’s parents are Benna Kolinsky and Dan Mandelbaum. The comedian studied creative writing at the University of California, Santa Barbara. After he graduating from college, Mandel moved to London, England, for six months. He started doing stand-up comedy and reveled in the rush he got from performing. Mandel then moved to San Francisco to pursue his dreams of being a performer. In 2006, he took part in the prestigious San Francisco International Comedy Competition and placed third. He gained national attention when he won the Comedy Central’s Open Mic Fight in 2007. This helped his career take off, and Mandel has never looked back since.

The Serious Business of Comedy

Mandel made his TV debut doing stand-up comedy as a guest on The Late Late Show with Craig Ferguson in 2007. He earned his first acting credit with the short film Here’s the Thing... the following year. Mandel then started appearing on shows like Conan, Chelsea Lately and Comedy Central Presents. He also appeared on the Comedy Central show, Reality Bites Back. As an actor, Mandel has appeared in hit shows such as Modern Family, Castle, Love Bites, and Happy Endings. He starred opposite Hank Azaria in the show Free Agents on NBC, and has a one-hour comedy special called Negative Reinforcement. When Mandel is not cracking jokes or hosting his own shows, he is busy writing sitcom pilots for channels like NBC, FOX, FX, FXX, and Disney Channel.

Also Read: What is Tracy Morgan’s Net Worth? The Comedian Makes a Comeback to Netflix!

Intergalactic Defender of the Universe or Guy with Hairy Back?

Mandel is the funny hard-partying host of the show Barmageddon which aired on truTV. He described the show as “50% social experiment and 50% hilarious, orchestrated situations.” The show visited several large cities like Miami, Baltimore, Chicago, and New York City. It also made Mandel a very recognizable face on TV. His favorite part of the show was drinking and partying professionally. He joked that Barmageddon was the first job that allowed him to use his college education. As he wanted to be a novelist while in college, he likes getting the chance to write. He actually wrote a novel while he in college. Mandel says that he might try writing novels after he retires.

There is no information on Mo Mandel’s net worth but considering his successful career on TV, it must be substantial. There is also no information on Mo Mandel’s girlfriend, but one has been mentioned in his stand up routines. However, trust Mandel to come up with a funny line even on his relationship as he once tweeted, “My girlfriend keeps asking me fashion advice on what she should wear as though she doesn’t see the disaster I’m wearing.” The comedian has the unique ability to spot humor even in the most mundane of situations which is why people love his jokes. In these turbulent and tense times, we could all use a laugh!