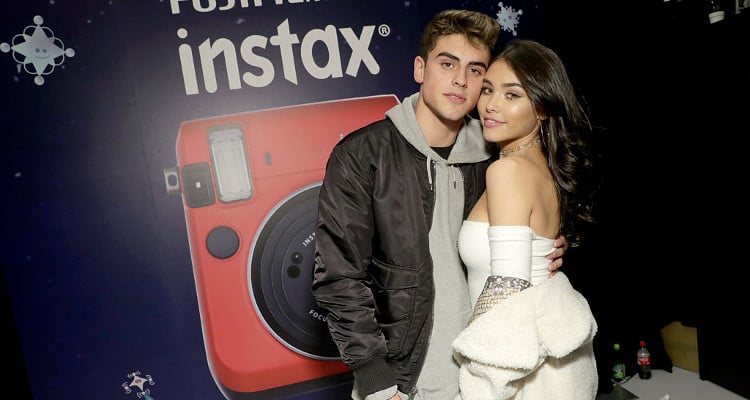 Jack Gilinsky is in a storm of controversy for repeatedly calling his then girlfriend, Madison Beer, a “f***ing s**t.” After the clip went viral, a chastened Gilinsky gave a long apology for his shocking outburst. The singer said that he was in a dark place and regrets what he has done.

Jack Gilinsky broke his silence over the shocking leaked audio on which he can be heard calling his long-time ex-girlfriend Madison Beer a “f***ing s**t.” The Jack Gilinsky audio clip was obtained and posted online on Saturday, July 1, 2017, by the website Pop Crave. Once the audio file was posted online, the news of Gilinsky abusing his girlfriend spread like wildfire. He took to Twitter on Sunday, July 2, 2017, to explain his bad behavior in a lengthy post. This unfortunate event has piqued people’s curiosity about Gilinsky, so we have some details from Jack Gilinsky’s wiki.

Who is Jack Gilinsky?

Born on September 10, 1996, in Omaha, Nebraska, Jack Gilinsky’s age is 20. He teamed up with his friend from school, Jack Johnson, and formed the pop-rap duo, Jack & Jack. His career began in 2007 when the duo created their first collaboration, MotherFalconQuagmire on YouTube. They posted short satires including lip syncing music videos, parodies of popular songs, and British-speaking boys. Things looked up for Gilinsky in 2013 when the duo posted six-second comedy clips like the I Never Miss series. Then, their Nerd Vandals clip went viral gathering 25,000 followers in a short time. Gilinsky’s musical career started in 2014 when the duo’s first unofficially released song “Indoor Recess” dropped.

Making His Own Music

The duo’s first original song “Distance” was released in January 2014 followed by 11 self-released singles. Gilinsky does not want to record with a major record label, though he has been approached. He plays instruments and writes his own music, which is influenced by genres like reggae, R&B, pop, and hip-hop. Their songs like “Doing It Right,” “Tides,” “Cold Hearted,” and “Right Where You Are” have performed well on the Billboard Top Digital Songs list.

Jack Gilinsky’s net worth is estimated to be a modest $1.5 million but is sure to grow considering he is just 20 years old and has a long career ahead of him.

Gilinsky has several tattoos on his body and does philanthropic activities as well. As a part of Jack & Jack, he has worked with several brands to promote skin cancer awareness and anti-bullying content. However, his good work has been overshadowed by his profanity-laced outburst against his then girlfriend. Jack Gilinsky and Madison Beer were together for almost three years but have since split. The audio recording was from last year and shows Gilinsky in a bad light. He has apologized for his outburst and wrote, “There’s no justifying the words that came out of my mouth in that audio file. In no way do I stand behind who I was in that part of my life. But people change and learn from their mistakes.”

Learning from His Mistakes

He added that while they are no longer together Beer “is someone I will love forever.” Fans who want to check out Gilinsky’s photos can check out his Instagram account. Jack Gilinsky’s Instagram account is full of pictures of the singer with his friends, pets, in his studio recording music, and with family. Though the audio clip attracted negative publicity for him, he has apologized and is ready to move on. Gilinsky is just 20 years old and has his entire life ahead of him, so this is just another small bump in the road for him.