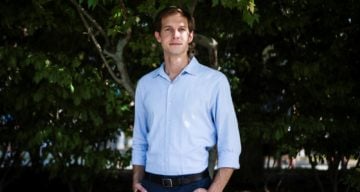 Jake Auchincloss Has a Distant Relation to Jackie Kennedy Onassis

Before she was FLOTUS and the iconic “Jackie O,” she was born Jacqueline Bouvier to John Vernou Bouvier III and Janet Lee Bouvier. Her parents’ strained marriage ended in a very public divorce, and Janet Bouvier later remarried to Hugh Dudley Auchincloss Jr.

Jacqueline Kennedy’s stepfather was a famous stockbroker and lawyer and also stepfather of Gore Vidal. He was married three times and had five children, including Hugh Dudley Auchincloss III, the stepbrother of Jackie O and Gore Vidal.

Jackie O was apparently close to her stepfather. He helped her get her first job in journalism, gave her away at her wedding to President John F. Kennedy, and even contributed to then-Democratic candidate JFK’s campaign, though he had been a long-time donor of the Republican Party.

So when Jake Auchincloss succeeded Joe Kennedy III (JFK’s grand-nephew) as the representative of Massachusetts’ 4th congressional district, there were queries if Rep. Jake Auchincloss is related to Jackie O and the famous families she is connected to.

The former Marine Jake Auchincloss was born on January 29, 1988 to Laurie Glimcher and Hugh Auchincloss Jr. However, Jake’s father is a different Hugh. He is neither the stepfather nor the stepbrother of Jackie O.

Jake’s father is an immunologist and physician-scientist. Jake’s grandfather, Hugh Auchincloss Sr., is the first cousin once-removed of the stockbroker Hugh Auchincloss who married Janet Bouvier. That makes for a very indirect connection between Jake Auchincloss and Jackie O.

Not only does the congressman have a connection to the Auchincloss family, but he is also related to other historic figures. His great-grandfather is Harvey Bundy, one of the architects of the Marshall Plan. His great-uncle, McGeorge Bundy, was JFK’s national security advisor. His grandfather, Melvin J. Glimcher, was inducted into the National Academy of Sciences for his pioneering work on artificial limbs.