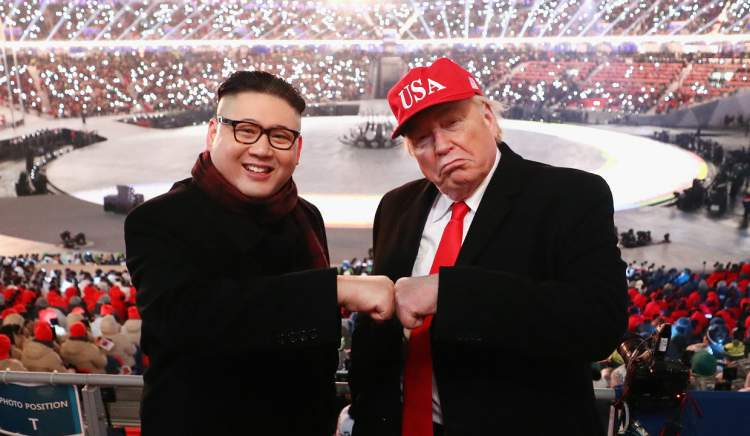 If you watched the Winter Olympics 2018 and saw the North Korean dictator on opening day, then don’t be fooled! The man who came about waving the flag was actually just a Kim Jong-un impersonator named Howard!

The Winter Olympics 2018 has been one of the most entertaining things to watch on TV! From Tonga’s shirtless flag bearer to the men impersonating two of the biggest leaders in the world, Pyeongchang has seen some exciting moments. Viewers now want to know everything about the fake Kim Jong-un and where he came from.

While the world was watching the exciting hockey game between Japan and unified Korea, people were mildly shocked to see a familiar dictator during the game.

The imitator’s 15 minutes of fame didn’t even last that long. He was taken aside by security who, along with nearly everyone else, was confused with how to deal with Howard.

Officials first led him to his seat and asked him to keep a low profile.

“After that a few heavies rushed over really p***ed off and I suspect they were North Korean delegates, just by the way they were dressed. I can’t confirm, but [they were] most likely North Korean,” Howard recalled.

“They dragged me out and they kicked me in the shins and were shouting something really angrily in Korean,” Howard later expressed.

The impersonator’s brief stint with the cheerleaders might have offended some people, but many in the audience were smiling and laughing.

Who Is Howard, You Ask?

The duo created quite a buzz. And, they had people guessing as to why they donned new personalities.

Howard, a Chinese-Australian based in Hong Kong, is a musician. His aim at the Winter Olympics 2018 was to get closer to the cheerleaders and spread the message that he was heard shouting, “We are one!” and “Unify the motherland!”

But the funnyman’s pranks were not received with laughter by all. Instead, he was hauled away from the crowd by the South Korean National Counterterrorism Centre. He was taken into a room, detained, and questioned behind closed doors.

In his defense, Howard said, “I eventually got released after half an hour and that was it and as soon as I got out there was a bunch of reporters asking me questions.”

The disappointed impersonator continued, “I thought I’d turn up in character and give the games a little bit more spice, after all, South Korea is a democracy, with freedom of speech and I think we need to satirise the whole situation.”

How People Took His Joke

The Jong-un family probably feels differently, and so do many others around the world. This topic is seen as a sensitive global issue, which is not to be taken frivolously.

The image of the North Korean ruling family is very controlled, and is released to the public after a detailed process. Impersonating a member of the ruling family in North Korea is considered to be insulting. Though Howard’s nationality has nothing to do with him spreading the message to unify the two Koreas, he said that the people who had a problem with his act were the “minders.”

“South Korea is a democracy, it has freedom of speech, and it is very important to remind the whole world that you can’t let North Korea hijack these games using the cheerleaders and everything that they put out,” Howard said, adding that his other motivation of coming to the games was to meet the cheerleaders.

The guy who meticulously matched every detail of the dictator’s garb and actions believes he can’t be sued for anything. He did not harm anyone, and added, “If you don’t like my face there’s nothing you can do about it, I was born this way.”

Whether he was there to collect a few laughs, or to prove something, fake Kim Jong-un, a.k.a. Howard, caused quite a stir.