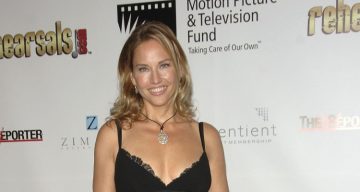 When Jill Goodacre was diagnosed with breast cancer, she immediately underwent radiation and took medication to battle the disease. As part of the drug’s side-effect, she briefly struggled after gaining weight. But now, after five years of treatment, her cancer is in remission, and she recently spoke out about her harrowing experience.

It was just another regular health check for Jill Goodacre, musician and actor Harry Connick Jr.’s wife, in October 2012, but  that ended up being the day her life was turned upside down. Her routine mammogram report came back clear, but her doctors said, “Okay, looks good. Since you have dense breasts, just go across the hall for your sonogram.” It was then that something was detected and, after undergoing a biopsy, Goodacre received the shocking news that she had stage one invasive ductal carcinoma. She was to immediately get a lumpectomy, followed by radiation treatment. Goodacre and Connick Jr. were devastated by the news and struggled to come to terms with it.

It brought back harrowing memories for Connick Jr., whose mother passed away of ovarian cancer when he was just 13 years old. After his wife’s diagnosis, he revealed, “I was scared I was going to lose her, absolutely. I wasn’t going to let her see that, but I was. I know from losing my mom that the worst can happen. She’s my best friend, and I really don’t know what I would do without her.” Goodacre says that telling their three daughters was one of the hardest things she has had to do, “It broke my heart.” Thankfully she did not have to undergo chemotherapy, but she had a long and worrisome battle. Pathology tests revealed that she had a less invasive form of cancer called ductal carcinoma in situ, for which she needed surgery and radiation the very next day.

Goodacre took Tamoxifen regularly, as prescribed by her doctor, which is an estrogen modulator that helps prevent the development of hormone receptor-positive breast cancers. Jill Goodacre’s weight gain was a side-effect of taking this pill, and was something she struggled with. “I’ve always been a pretty fit person, and so just to be rounder and heavier and not to really be able to do much about it – that’s been hard. It’s taken a lot out of my self-confidence,” she explained. The good news is that she is approaching her fifth year of remission, and will not need to take Tamoxifen anymore. Goodacre is now preparing to share her experiences with those outside her family.

Things are Looking Up

You don't count as a VS model if you haven't been in Friends! You are very welcome! #jillgoodacre #victoriassecret #model #90s

Everything is looking up for their family, as Goodacre revealed, “The doctors all say that after the five-year mark, things look optimistic, so we’re starting to feel pretty good.” The weight gain was particularly tough on the former model, who is best known for walking the runway for Victoria’s Secret in the 1980s and the early 1990s. She graced the pages of many glamour magazines and, along with fellow supermodels like Stephanie Seymour and Frederique, she helped Victoria’s Secret grow into one of the world’s biggest companies in women’s lingerie, swimwear, hosiery, and clothing. People who want to look at Jill Goodacre’s photos should head to her Instagram account, which has shots of her modeling days.