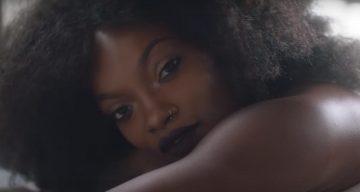 Michael Blackson, who is an ongoing feud with comedian Kevin Hart, is back in the limelight and fans can’t help but ask where Blackson’s girlfriend, Georgia Reign is at! If you’re wondering the same, then we have the lowdown right here.

Georgia Blackson is a Grammy-nominated singer/songwriter and was with Michael Blackson until 2016. The couple was going strong, until cheating rumors took over and they allegedly went their separate ways. This Georgia Reign wiki is going to reveal a lot more.

Reign said in an interview that she hails from Georgia, Atlanta, and she started out as a dancer.

She started out as Jarvis and Bobby Valentino’s backup dancer and after touring, she was asked to join an all-girl group that was then signed on to Babyface’s label. While working under his label, she became inspired by him and began to realize how talented she truly was.

The singing gene must run in the family as Reign explained that’s where she gets her vocal ability from. According to her, everyone in her family can sing!

Through Babyface, she then met producer/songwriter, Adonis. And for Reign, this is when things really began to click.

She discovered herself as a great writer, and said, “On top of him being from Atlanta, our chemistry in the studio is beyond out of this world. Working with the both of them has made my career worth fighting for. It’s given me a bigger drive.”

She saw real success when she was chosen to work with Chris Brown on a song that ended up landing her a Grammy nomination!

Tell me what you gon' do to me Confrontation ain't nothin' new to me You can bring a bullet, bring a sword, bring a morgue But you can't bring the truth to me. Fuck you and all your expectations I don't even want your congratulations I recognize your false confidence? And calculated promises all in your conversation I hate people that feel entitled Look at me crazy 'cause I ain't invite you Oh, you important? You the moral to the story? You endorsin'? Motherfucker, I DON’T EVEN LIKE YOU Corrupt a man's heart with a gift That's how you find out who you dealin' with A small percentage who I'm buildin' with I want the credit if I'm losin' or I'm winnin' On my momma, that's the realest shit- KDot aka Kendrick #BLACKHistoryMonth

No Luck In Love

It seems that Georgia Reign and Michael Blackson got onto the super-speed love train! They met, they fell in love, and they decided to move in and get engaged, too. (All in the span of a couple years)

Reign’s Instagram might be deserted now, but she and Blackson often shared their photos together on social media.

They were a couple in love, but the love did not last. A video of Blackson went viral on the Internet, where everyone could see him in a hotel room with a woman—who was not Georgia!

She was soon to break it off with him, and Blackson went on an explanation spree which proved futile.

He took to Twitter to prove himself innocent. Here’s what he said:

I just watched the video, ok it wasn't my house n that bitch that did that shit I hope I got u pregnant in the throat you thot beech

He then also went on to formally apologize to Georgia Reign, and expressed how embarrassed he was.

Blackson later said that the woman in the video was an ex, as the video looks older than three years.

The songstress is very talented when it comes to music, and she certainly knows how to dress for it!

Reign’s fashion sense has become the envy of many women, and she pulls it off with so much ease.

Reign’s hit’s include, “Mark My Words,” “Rain,” “What Do The Lonely Do At Christmas,” “Feel Like A Woman,” and many more.

You can check out to more of her songs on SoundCloud.

Hold up wait a minute, I know comedian Michael Blackson is not a switch hitter? His ex fiancé the beautiful Georgia Reign called his ass out 2day on IG. She nvr said Michael Blackson was gay but she did post this IG msg: "Go suck each other's dick & shave each other's beards" Lol! Whoeva this person is, they do have a full beard & all I can say is, I see a man & not a woman. He wld cheat on Georgia for that? Men ain't shit & they don't gv a fuck who they fuck. Nowadays, these men lk the vagina & the ass!! Damn!! Prettystatus.com #Cheaters #SideChick #GeorgiaReign #Comedian #SwitchHitter #MichaelBlackson

Also Read: Who Won The B.E.T Awards In 2018 Which Was Hosted By Michael Blackson?

Along with making meaningful music, Georgia Reign’s motto is to make this world a better place.

She is a great motivator, and her Instagram posts prove it. She says she wants the world to know that she is “every woman.” That she also cries, laughs, cooks, and yells, and she is real.

We suggest you get on board with her today!

It’s ALL THOT….I mean ALL STAR weekend in LA?? I prefer jeans and a top??‍♀️headed to sing the National Anthem?