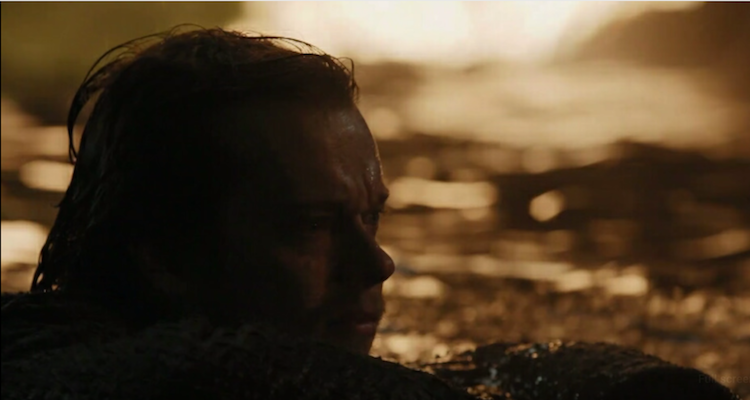 Who was hanging from the ship on Game of Thrones? That’s the question viewers are left with after witnessing one of the best fight scenes in the show’s history. If you are in desperate need of a Game of Thrones recap or a few Game of Thrones spoilers, then you came to the right place!

There was a lot going on in the “Stormborn” episode of GoT but we think it’s best to focus on the most important parts, especially the battle-filled ending! The episode starts off right where we left off in the first episode and the young Queen Daenerys means business. She’s in her war room with Tyrion and Co. and everyone has an idea on how to dismantle Cersei and take back the Seven Kingdoms —although Jaime did tell Cersei she really only has dominion over three of the seven at the moment— but can’t agree. The Mother of Dragons grills Varys on how he serves one monarch after the other but after he cleverly gives her his undying loyalty and after a bit of threatening banter, Dany begins to trust him—long enough for him to keep his head. Tyrion reminds everyone that Dany isn’t meant to be queen of the ashes and can’t unleash her dragons on Westeros to attack Cersei, or there will be no one to rule. What’s a queen without subjects? But Lady Olenna retains her crown as the queen of shade by reminding Dany that she’s a dragon among sheep and is better off ignoring clever men. Bless you Olenna, we hope you and that sharp wit make it to the end!

Cersei gathers an army and runs her own spin campaign to make it seem like her enemies are everyone’s enemies. It actually works and even though she thinks they’re all beneath her, she needs them nonetheless, and does her best to hide her blue-blooded superiority. So naturally she enlists the help of Euron (Yara Greyjoy’s crazy uncle) to attack and he offers to bring something back for her. But more on that later.

Up in the North, Jon Snow leaves Sansa in charge (before threatening to kill Littlefinger) and agrees to meet Dany and have a little family reunion in order to join forces and protect his new people. What happens when a king meets a queen and they’re both related? And while Jon leaves the North, Arya heads home in order to be with her family after Hot Pie (the only character who has actually been winning the game) told her that Jon is alive and king. She runs into her direwolf Nymeria, but she’s changed since the last time Arya saw her. Arya realized that they’ve both changed but figured denial was the best way to cope.

Who Died in Game of Thrones?

Who hasn’t died would be a shorter question, but on the Greyjoy ship—plenty! Euron attacks the ship (interrupting Ellaria and Yara’s flirting scene) like that uncle who ruins every family event. Euron kills two of the three Sand Snakes—Nymeria (yes, there are two) and Obara—with their own weapons, while the third Sand Snake, Tyrene, is taken away with her mother, Ellaria. As for the worst brother of the year award, that goes to Theon, who jumped overboard instead of attempting to help Yara. Did Yara Greyjoy die in Game of Thrones? No, she was taken by her uncle but we’re not sure how long she has! At the end of the episode, Nymeria and Obara are seen dead, with their bodies hanging off the ship.

The official synopsis for “The Queen’s Justice” reads: “Daenerys will be holding court, Cersei returns a gift and Jaime Lannister learns from his mistakes.” Cersei is getting that gift Euron was talking about: Ellaria, Tyrene, and Yara. But why and how would she return them? Jon meets Dany and refuses to “bend the knee” like she wanted but will give up his title if she helps him with an army. There’s a major battle coming Cersei’s way and judging by the title, Dany is going to get closer to what she wants. Also, with Jaime not guarding Casterly Rock, Tyrion’s part of the plan may become a success. Could that be a mistake on Jaime’s part or the mistake of siding with his sister?