Listen up G-Eazy and Halsey fans, we’ve got some sad news; the couple has called it quits after being together for a year! They began dating back in 2017, and while their fans were sure this was not like any other relationship, the couple has announced the unexpected! Halsey took to Instagram to share the breakup news with her fans.

From celebrating Valentine’s Day and looking like a million bucks at the Vanity Fair Oscar party to sharing one of the best new year’s kisses, G-Eazy and Halsey have given millions #CoupleGoals.

But like many things, this relationship also proved to be too good to be true. And although there is no clear answer as to why G-Eazy and Halsey broke up, the reasons could be many.

Relive their relationship through Halsey and G-Eazy’s dating timeline below.

The Relationship Is Over

While Halsey and G-Eazy have been nothing but sweethearts in love over the past year, the Instagram Story came as a pinch! Halsey took to the social media platform on July 3, 2018, to officially announce that she and G-Eazy were over. 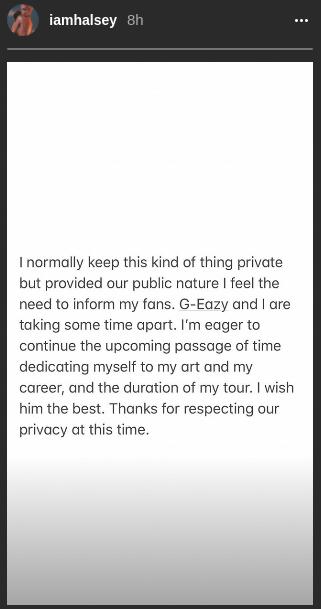 The couple had a very glamorous relationship while it lasted. And right now, it looks like Halsey and Machine Gun Kelly are sparking some rumors!

G-Eazy, on the other hand, is currently in Paris, according to his Instagram Story. He has not yet commented on any of the breakup drama.

As fans were still coping with the breakup news, other news broke out that Halsey was spotted with Machine Gun Kelly just a few days before her Instagram announcement!

The couple was spotted partying it up in West Hollywood and looked like they were having a great time together.

In a Rolling Stone interview, Machine Gun Kelly spoke about his relationship with Halsey. Although he didn’t say anything about the dynamics between them, he did say that he wouldn’t comment on “titles or labels or anything,” but that he felt “16 again.”

E! said that the “Bad Things” singer has “always been into Halsey.” But because he was not looking for a committed relationship, she moved on to G-Eazy.

Fans can put two and two together, and the latest spotting is also raising eyebrows. Are we going to see a Halsey-Machine Gun Kelly duo soon?

Well, folks, it is Hollywood after all!

G-Eazy Accused of Sexting Another Woman

Rumors of G-Eazy cheating on Halsey took the Internet by storm when he was alleged to have shared some exposing photos of himself to another woman via text. He and Halsey were very much together at the time but he did not comment on any of the allegations.

The news was brushed over so fast that it might as well have been a fake rumor. But sources who reported the news said that they obtained Snapchat texts of G-Eazy flirting and sharing nude pictures with a mystery woman.

All this went down a month after he was arrested in Sweden for possession of drugs!

Stockholm proved to be troublesome for the lovers. G-Eazy was reported to have been arrested after he was allegedly found with cocaine.

Halsey was there, too, at the time. And TMZ reported that a security guard might have hit her as they stuffed G-Eazy in the police car!

In a video they obtained, Halsey could be heard screaming about taking a blow during all the confusion. There are several shots of the couple from inside the club, too, with Sean Kingston also present.

G-Eazy avoided time behind bars, but he was slapped with a $9,000 fine and a two-year probation. He also had to pay about $850.00 in restitution to the security guard he allegedly assaulted.

Halsey and G-Eazy were the life of the New Year’s Eve party at E11EVEN in Miami when they played hosts! 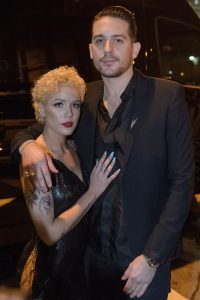 The couple shared a passionate New Year’s kiss on stage, too, while the rest of the club partied the night away!

G-Eazy shared plenty of pictures of the event. He also posted pictures of the couple posing with some of the who’s who in the music industry, including Quincy, Sean Combs, and Cassie.

Halsey and G-Eazy Released “Him & I”

The video for “Him & I” clearly showed the couple’s love for each other. The album, The Beautiful and Damned, was released two weeks later.

The Lovebirds Were Spotted

Halsey and G-Eazy were spotted at several hip joints and nightclubs back in mid to late 2017.

Page Six reported back in September 2017 that the couple sipped cocktails all night long while bonding. They even jumped up on stage to sing a couple of numbers together.

“They couldn’t have looked happier and more in love,” a source reported.

Prior to his romance with Halsey, Lana Del Rey and G-Eazy dated each other for less than a year. It was reported that G-Eazy began falling for Halsey, which is what created a rift between him and the “Summertime Sadness” singer. 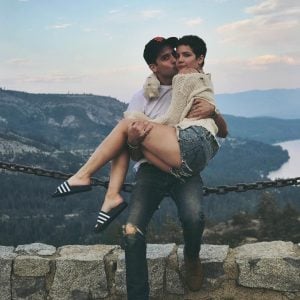 At the time, the former couple was reportedly collaborating on “Him & I” together and it wasn’t long before things went sour between them. It seems working on music together brought them closer, and possibly began their relationship, too.