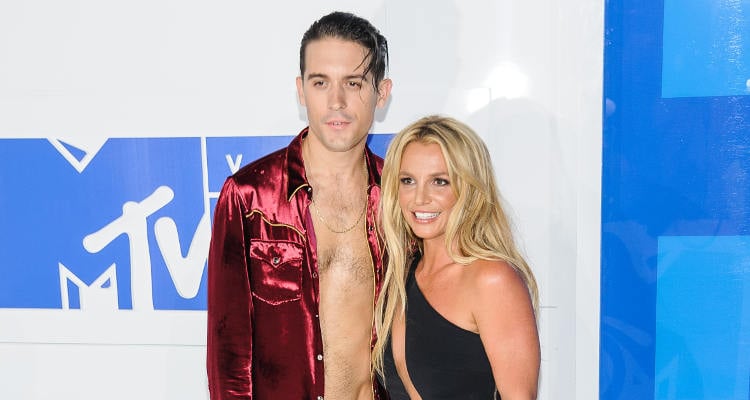 You may be familiar with the name G-Eazy, as he is the rapper who is featured in Britney Spears’ latest song, “Make me” from the pop princess’ latest album, Glory. On Sunday, G-Eazy hit the VMA stage with Spears and two performed, “Make me,” as well as the rapper’s own hit, “Me, Myself, and I”. If just performing with the pop princess herself on the very stage that made Spears a household name wasn’t enough, their onstage chemistry has sparked some romance rumors, too. Before “Make me” Solidified the rapper’s popularity in the music scene, the 27-year-old was already making a name as a song-writer and record producer. So, who exactly is G-Eazy?

G-Eazy was born Gerald Earl Gillium to Ukrainian-American parents in California. His parents separated when he was a child and his mother later began to date a woman. His mother’s new relationship confused the young Gillium and he was initially hostile to his mother’s girlfriend, Melissa. He later grew to accept Melissa and even said she’s a positive influence on him.. From the time he was a young boy, his mother instilled an interest for music in him and supported him in his pursuit for a career in music. Melissa unfortunately, passed away from overdose of depression medication. Gillium details the experience of finding her lifeless body in their house in the song, “Everything will be okay” from his third album, When It’s Dark Out.

Under the stage name of G-Eazy, he started out as a record producer, while he was a university student. As part of a local hip-hop group releasing songs on their Myspace page, he gained popularity and even caught the eye of artists like Snoop Dogg. His mixed tape, “The Endless Summer” led to his big break and he got the opportunity to tour with Drake. Following that, G-Eazy wrote and produced his first full-length album, Must Be Nice.

At a staggering 6 feet 5 inches tall, G-Eazy is reminiscent of James Dean, with his slicked back hair and leather jacket. Despite looking like he’s straight out of “Grease”, his musical style reflects the current hip-hop genre. His music has an old school charm with a modern twist. Speaking about how he creates his music, the rapper told The Guardian, “I’ve always had this drive, this entrepreneurial spirit inside of me, so music became a vehicle for that. I knew I wanted to do something, and create something on my own, and become somebody and build a brand and all this.”

His Cheerleader is Always with Him

His mother is his biggest supporter and is always present at his concerts. She’s never missed any of her son’s shows and once Gerald even invited his mom on stage for a smoke!

Myspace was G-Eazy’s first platform to showcase his talent, while his mixtapes on his official website landed him his first big break. From selling mixtapes, G-Eazy is now selling out tours and building a name for himself, especially on social media. Recently, he hit the 1 million mark on Instagram, joining the Instagram millionaires club.