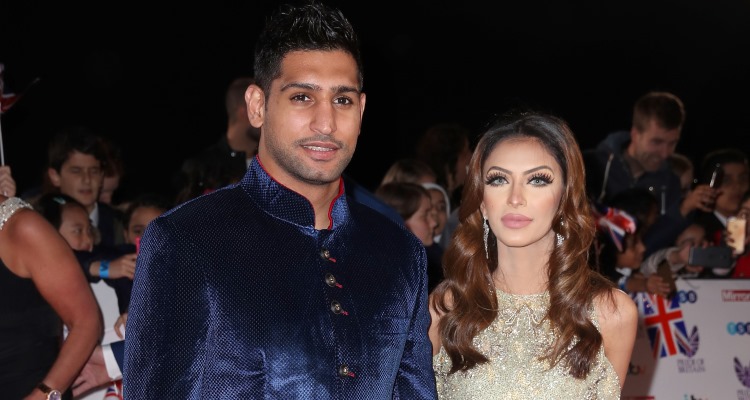 It looks like Amir Khan’s wife is taking a few low blows from her husband, now that the two have been seen sparring on Twitter. The 30-year-old British boxer has accused his wife of being unfaithful, and now everyone wants to know if Amir Khan and Faryal Makhdoom are divorcing, officially. For more details, have a look at our Faryal Makhdoom wiki.

Amir Khan was born on December 8, 1986 in Bolton, United Kingdom to father, Shah Khan and mother, Falak Khan. His siblings are Haroon, Mariyah and Tabinda. Amir is a former light-welterweight champion, and he’s 5’7″ and weighs approximately 138 lbs.

Faryal Mahkdoom-Khan’s age is 26 and she was born in Brooklyn, New York on July 27, 1991 to her father, Shaukat and mother, Zia. She is of Pakistani descent and they have a home in the New York borough of Staten Island. Faryal attended Rutgers University School of Arts & Science and held a double major journalism and political science. She married her boxer husband in 2013 at the Waldorf Astoria Hotel, and they were introduced by a mutual friend. When it comes to Faryal Makhdoom’s kids with Amir Khan, they have a two-year-old daughter named Lamisah. You can also check out Faryal Makhdoom’s Instagram for updates on her life.

While everyone is just minding their own business, Khan goes and pulls a Rob Kardashian and puts his wife on blast, after a seemingly amicable split.

He first tweeted saying, “So me and the wife Faryal have agreed to split. I’m currently in Dubai. Wish her all the best.” But he didn’t stop there and then accused fellow British boxer, Anthony Joshua of having an affair with his soon-to-be ex-wife!

“Faryal moved on quick. Always mentioned to me how much she wanted to be with another guy, from all people another boxer,” he tweeted.

He added, “Lol moved up in the weight classes lol. Trust me I ain’t the jealous type. No need to send me pictures of the men your talking to #disgusted[sic]”.

He continued: “Left my family and friends for this Faryal. I’m not hurt but another fighter. I’m making it public. You getting the divorce #Golddigger.”

Makhdoom saw the tweets and her clap back was just as quick, saying, “I’m not sure if it’s your family tweeting for you. But I’m not the one who been in the papers for cheating.” Her next few tweets included, “I’m sure you left your family because they robbed you? Not because of me. Stop making false things up.

The two ranted back and forth as things got heated, but she continued. “After all these years. I’ve always defending a cheat, always stuck around for him, always had his back. And I’m called a gold digger?”

And in the following tweet, she wrote, “LOL! He’s given me jack sh—t. I pay house bills and bills for my daughter myself! It’s like I’m a single mother while he’s out messing around. And he has the nerve to blast me like that? The amount of evidence I have on you. It can destroy you. But since I loved you at one point in my life. I’ll just let it go.’

She went on to say that Khan is the one that’s been cheating and that his pants are the ones that have been down, not hers!

And as for Joshua: He denied even meeting Khan’s wife! Looks like divorce court is the next stop for these two, but custody over their daughter is a different story.