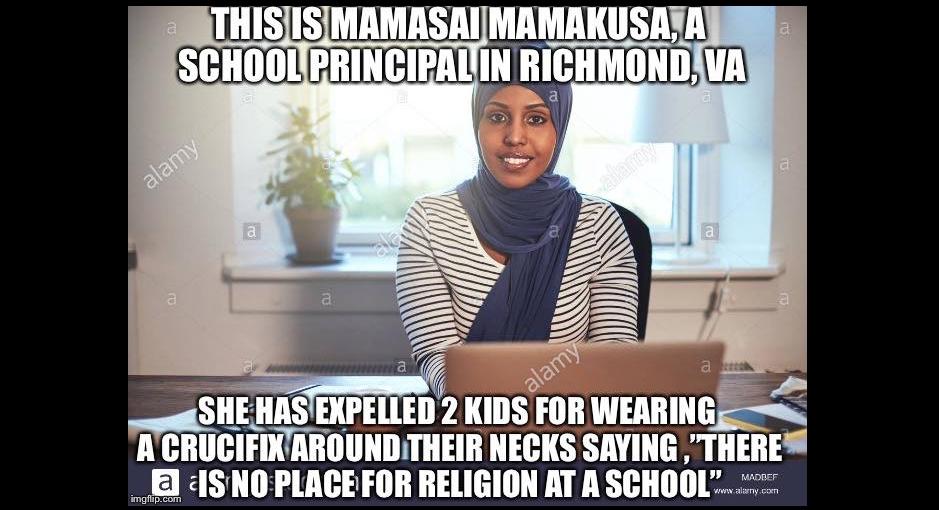 An organization called America’s Last Line of Defense has posted a news item on its Facebook page stating that Mamasai Mamakusa, a school principal in Virginia, has expelled two kids for wearing the crucifix. The post went viral, and now many citizens are angry at this news, venting their ire on social media. But is this story even true in the first place? Did this incident really happen? We at EarnTheNecklace.com decided to do some investigating of our own to find out the truth.

The news of a school principal in Virginia named Mamasai Mamakusa, who allegedly expelled two kids from school for wearing a crucifix, went viral with people sending it to others via social media. It originated from a Facebook post made by an organization called America’s Last Line of Defense. Many were angry to read this news and want to know the truth.

Citizens Are Reacting and Sharing Their Anger

A lot of people took this news very seriously and reacted to it immediately. Some have expressed their feelings of anger on social media.

For instance, one person named Linda Billenwillms wrote, “Kick her ass all the way back to her home…get the hell out of mine…If this is to make me mad…it worked.”

Many people are outraged at what they see as a blatant attempt to interfere with people’s freedom of faith and want Mamakusa punished for her act.

No Such Incident of Expulsion Has Come to Light

However, the bottom line here is that this news is fake. There has been no incident in Virginia where a school principal expelled students for wearing a crucifix.

The organization that posted the image and caption on their Facebook page have also put a disclaimer or notice on their site. It clearly states that all the news on their website is fake and for entertainment and satirical purposes only.

In its “About” section, it clearly states, “Nothing on this page is real. It is the collection of the satirical whimsies of liberal trolls masquerading as conservatives. You have been warned.”

It is evident that this news is fake and America’s Last Line of Defense is admitting it upfront.

The image of the young woman is also not connected to any such incident. It is taken from the stock images section from Alamy.com, which has a collection of over 145 million photos, vectors, and videos.

The description of the photo on the website reads, “Smiling young Muslim female entrepreneur wearing a hijab sitting in her home office working online with a laptop.”

You can check it out by simply keying the code “MADBEF” on the website’s search function. 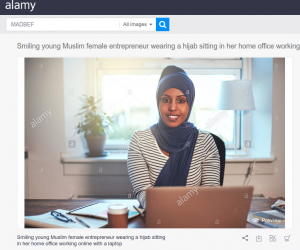 Screenshot of the image labeled ‘MADBEF’ on Alamy Credits: Alamy.com

The news that a Virginia school principal expelled two students for wearing a crucifix is not true. And the photo in the post is not of a school principal at all and was taken from a stock photography website.

So, the claim made by America’s Last Line of Defense is 100% false, and they have actually admitted it on their own website.