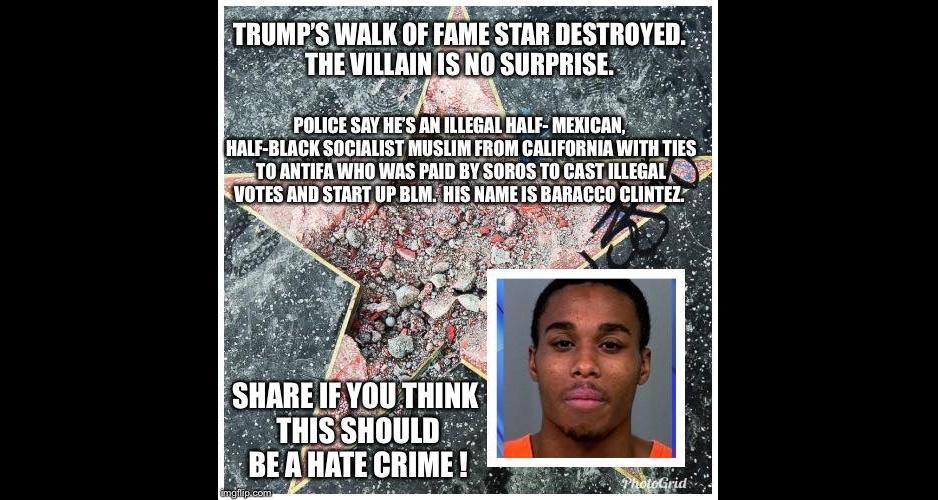 Donald Trump’s star on the Hollywood Walk of Fame has been subjected to vandalism since his foray into politics. But this time, it was destroyed until only a pile of rubble remained. And now, a Facebook post claims that a person named “Baracco Clintez” is the vandal. Although many can spot the joke in this claim, there are those who believe it. Fortunately, we’re calling out this cyberspace lore right here.

After the LAPD received calls on Wednesday, July 25, 2018, that Trump’s plaque on the Hollywood Walk of Fame was destroyed, they arrested a man on suspicion of felony vandalism. The alleged vandal reportedly used a pickax on Trump’s star and is being held on a $20,000 bail.

Word has it the man who vandalized the star last year will pay the bail bond. So, who is the newest vandal to target the president’s star?

According to a Facebook post by “America’s Last Line Of Defense,” it’s a man named Baracco Clintez. He allegedly was paid by George Soros to cast illegal votes and start Black Lives Matter, among other things. 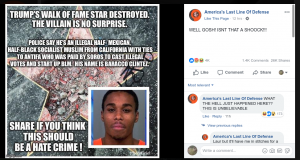 Most social media users were quick to recognize the post as a joke. But there are those who believed it. Even America’s Last Line Of Defense replied to a comment that they are surprised so many believed the post prank!

Note, America’s Last Line Of Defense clearly states that none of what it posts is real. The purpose of the website is purely entertainment and satire.

The suspected vandal in custody is actually a man named Austin Clay. Shortly after Donald Trump’s star was destroyed, Clay claimed responsibility and turned himself in.

However, the mugshot added to the image is neither Clay nor Clintez. It is actually a photo of a man named March Eugene Ratney, a convicted felon from Indianapolis who opened fire on a police officer’s patrol car and home in 2016.

Baracco Clintez is a clever play on the names of Barack Obama and Hillary Clinton. It’s given quite a few social media users a good laugh. And more so when they notice people are falling for this!

So, the claim that Donald Trump’s Hollywood star was vandalized by Baracco Clintez is not true.