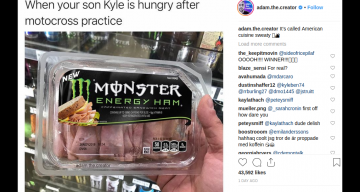 On October 31, 2018, the very famous meme maker, Adam The Creator, took to Instagram and posted a photo of “New Monster Energy Ham,” which is apparently a caffeinated sandwich meat. However, we’re here to find out whether the news about the new product is true.

The photo included text, which read, “When your son Kyle is hungry after motocross practice.” The caption of the post read, “It’s called American cuisine sweaty.”

Twitter user “ben shapiro is 5 feet tall” took to the platform and posted the same photo, with the caption, “your scientists were so preoccupied with whether or not they could, they didn’t stop to think if they should.”

your scientists were so preoccupied with whether or not they could, they didn’t stop to think if they should pic.twitter.com/FP7L6TriFB

People have been losing their minds since this post came up, and many are questioning, “Is Monster Energy Ham real?”

A lot of people commented that it’s Photoshop and it’s not real. Well, they are right, there is nothing called Monster Energy Ham.

Firstly, Adam The Creator is known for creating memes and the post is one of them, as you can see “adam.the.creator” is written on the box of the product. Also, if you observe properly, there is a watermark at the bottom of the post that reads, “made with momus,” which is a website and also an app that helps to create memes.

Secondly, Monster Energy was started by Hansen Natural Company, which is now known as Monster Beverage Corporation. The brand only provides energy drinks and nothing else. Furthermore, there’s been no news or updates about the brand coming out with Monster Energy Ham. Hence, it is safe to say that the news is completely fake.