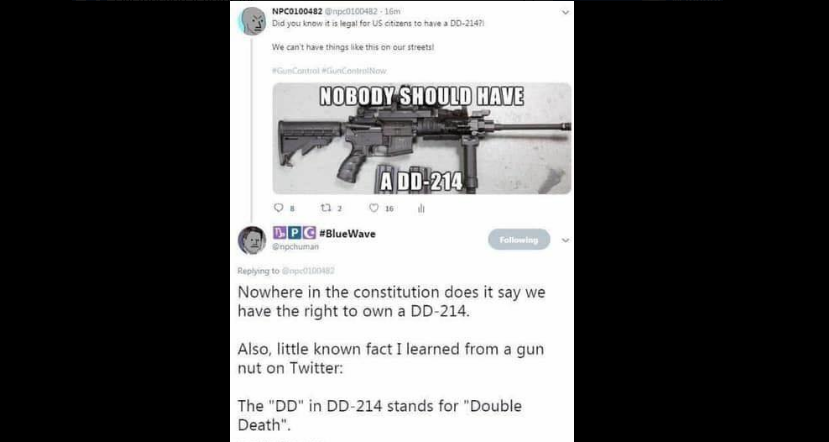 It is legal for the citizens of the United States of America to own a DD-214 gun?

People in the “Twitterverse” are tweeting that it is legal for U.S. citizens to buy a DD-214 gun. A tweet about it was shared on a Facebook page called “Dysfunctional Veterans,” and it certainly got the comments going. Some seem to be extolling the virtues of this supposed gun, giving the impression to others that this claim is true. But what is the DD-214 in reality? We decided to take a closer look and share the truth with you.

Facebook page “Dysfunctional Veterans”shared a screenshot of a Twitter conversation claiming that it is legal for U.S. citizens to own a DD-214 gun. The post says that people can buy this supposed gun called the DD-214, where DD stands for “Double Death.”

People are responding to this post on social media and writing about this gun as if it really exists.

Meanwhile on the internet somewhere…DV6

However, the truth is that there is no gun called the DD-214 at all.

The DD-214 is not a gun as some people might believe after reading the original tweet or the Facebook post; rather it is a form. That’s right! DD-214 is the common name for the “DD 214 Form.”

Various government agencies commonly use the DD 214, chief among them the Department of Veterans Affairs, to secure veteran benefits. The form may be requested by employers should a person indicate he or she has served in the military.

So it is clear that the DD-214 is not a gun at all, but just a form used by the United States government. So the claim that it is legal for the citizens of the United States to own a DD-214 gun is totally wrong and misleading.

“We can’t have things like this on our streets!”

“Nowhere in the constitution does it say we have the right to own a DD-214.”

These comments are giving legitimacy to the claim of DD-214 being a weapon, but they are completely wrong. We repeat: the DD-214 is not a gun; it is an official United States form.

Organization’s Comments Not to Be Taken Seriously

Dysfunctional Veterans (DV) is not recognized by any government body in the first place, so their members’ comments should not be taken as the truth.

On the DV Facebook page, it clearly says that it’s a “brotherhood and sisterhood of veterans rooted in sarcasm and the things that remind us that we are not alone.”

It further says that the organization exists to entertain those who served and the views expressed on it are not supported, endorsed, or even “liked” by the Department of Defense, civilians, or any other agency. It is clear that any comments on this page should be used for entertainment purposes only…and definitely taken with a grain of salt.

It’s also important to note that the accounts of Twitter users “npc0100482” and “npchuman” have been blocked by Twitter.

One reason for this could be the misinformation they have been spreading on social media via their accounts.

The Claim Is Entirely False

All this proves without a doubt that the claim made that it is legal for U.S. citizens to own DD-214 guns is entirely false.