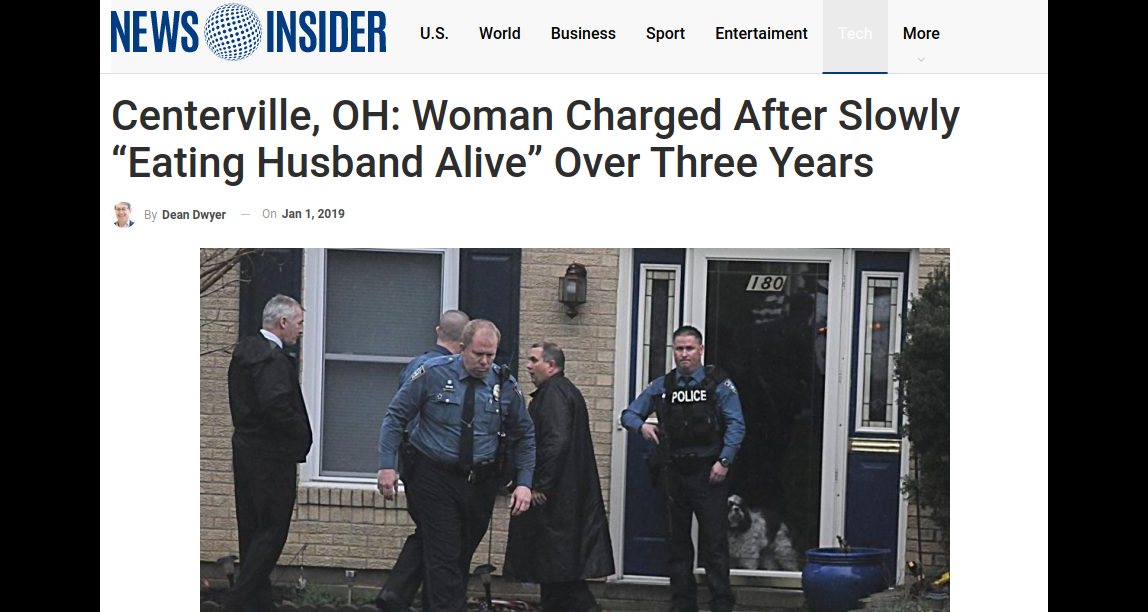 A screenshot of report by News Insider

A news report going viral on the Internet claims that a certain Francine Houston from Centerville, Ohio had been eating her wheelchair-bound husband alive for over three years. The woman was supposedly charged for the cannibalistic act. But did a Francine really feast on her husband? Centerville Police want you to take this piece of news with a grain of salt.

According to a report by a site called “News Insider,” a woman from Centerville, Ohio allegedly made a feast of her husband. Francine Houston, 62, reportedly cut parts of her husband, 65-year-old Paul’s flesh and ate it.

After a neighbor reportedly tipped off authorities, police arrived on the scene. Wheelchair-bound Paul was allegedly found with limbs missing and wounds on his abdomen.

Francine reportedly admitted to police that she has been cutting parts of her husband’s flesh for three years and eating them. She was arrested and charged with mutilation and assault and is facing a life behind bars, per the report.

The gruesome story caught a lot of attention online, with many wondering if it’s real or a hoax.

Given that this report is spreading like wildfire online, the Centerville, Ohio Police Department immediately cleared the air. The real Centerville police called the report a “FAKE news story” on its official Facebook page on New Year’s Day 2019.

Confirming that none of the details mentioned in the story are factual, the post reads: “The fake story is designed as ‘click bait’ to draw the reader to their website. The website is admittedly “infamous” for the entertainment stories.”

The Image Is from a Real Incident

While the news report by itself may be too outlandish to believe, the site uses authentic resources to make it seem real. The primary image used in the report is of real Centerville, Ohio officers at work. However, as Centerville PD confirmed, it’s from another incident that occurred in April 2018.

Back then, officers responded to a home in Hampton Road, Centerville when shots were allegedly fired. Police didn’t find any evidence of a shooting or any victims. An adult male was detained because he was hallucinating.

Locals saw heavy police presence around the home as they investigated the incident. A picture taken during the April 2018 incident was used to make it seem that officers were at the home of the fictional Francine and Paul Houston.

News Insider is a relatively young site that was registered on December 24, 2018. Since then, the site has been busily publishing “fauxtire” stories.

The site writes in its About section that its focus is “satirical entertainment publication” meant to be humorous and nothing more. It has published many other made-up stories designed for entertainment.