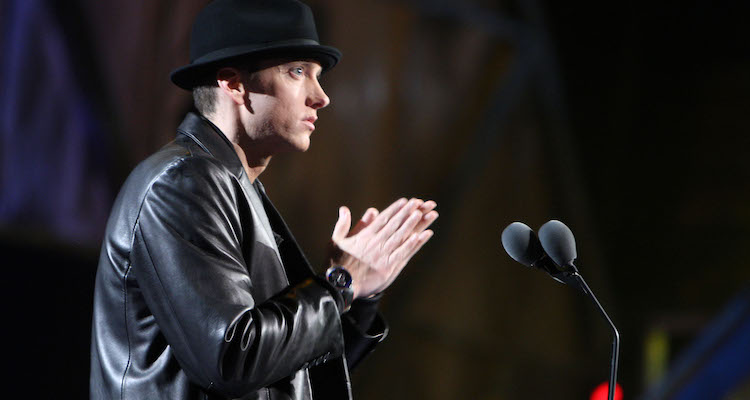 In a world where it takes a major artist to move the needle in terms of sales, there are very few left in the rap game that can generate such anticipation for new music like Eminem can. It’s been four years since his last proper album, and the anticipation has built almost into a frenzy. But when is Eminem’s Revival release date? Maybe more importantly; has Eminem’s Revival leaked already? Strap yourself in because we’ve got all of the information you need for the release of Eminem’s Revival album!

We first got word in 2016 that Eminem’s new album was finally in the works. He released the track “Campaign Speech” on October 26, 2016, the same day as the third presidential debate, and just 19 days out from the election. Eminem tweeted, “Don’t worry I’m working on an album! Here’s something meanwhile.”

It seemed that within minutes of the announcement, rumors began to swirl around Eminem’s new album. From fake release dates to lists of collaborators, there were so many stories about the new album that it was hard to differentiate between fact and fiction. At the end of the day, 2016 ended without a new Eminem album.

In June 2017, steam started picking up again when 2 Chainz posted a pic of him and Eminem, basically revealing that the two were working together. 2 Chainz later confirmed that he worked on a track for Eminem’s new album. Things were quiet again until someone took to Instagram to post the album cover for Yelawolf’s Trial by Fire. On it, a billboard ad can be seen promoting a drug called ‘Revival.’ From there, someone noticed that the “e” was reversed, just like in Eminem’s logo. Shortly after, a video for the fake drug appeared, with actors dropping references to various Eminem songs.

On October 10, Eminem appeared in a video segment for the 2017 BET Awards with a freestyle that put President Trump on blast.  Titled “The Storm,” it immediately went viral with millions of views on YouTube. November 8, 2017, saw the first official announcement of a single called “Walking on Water” featuring Beyoncé, which dropped two days later.

Eminem’s Revival in 2017 has had a number of rumored release dates, but many believe it will be November 17, 2017. The rumored release date is likely due to Eminem’s Saturday Night Live appearance on November 18, which some think odd, unless of course, he has an album coming out around the same time!

We also know that there are a number of collaborators on the new album. Beyond 2 Chainz and Beyoncé, it is also rumored to have appearances by Wale and Dr. Dre. Speaking of the good doctor, we also know that Dre is as executive producer on Revival and that Rick Rubin may have also produced a track or two, along with Mr. Porter, DJ Premier, Just Blaze, Boi-1da, The Neptunes, The Alchemist, DJ Michael Keenan, and Symbolyc One.

But what about all of those rumored collaborators? Is Adele on the album? Or Chance the Rapper, Kid Cudi, Vince Staples, and The Weeknd? We won’t really know until the album is in our hot little hands! But is it leaking early? Has Eminem’s Revival already leaked? As far as we can tell, it hasn’t leaked yet, but rumors are rife that it has! Part of the reason for the secrecy around the release date is to keep the album from getting out there early. Hopefully, if we don’t have it today, we’ll have it soon!