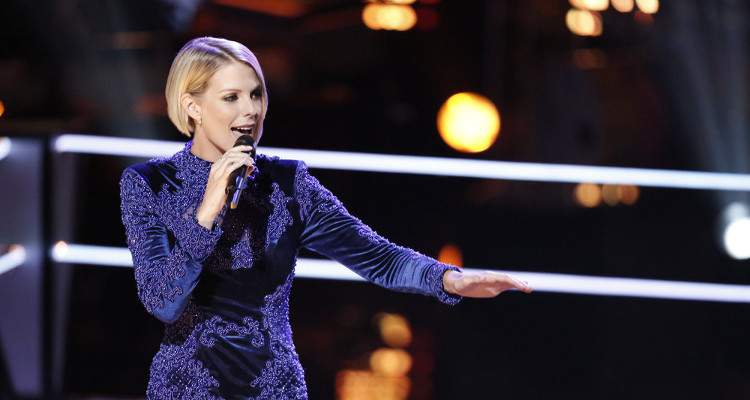 The judges on The Voice season 13 told Emily Luther that nobody on the show had a voice like hers. She proved them right by winning in both the battle and knockout rounds to make it to the live shows. Luther started singing at a young age, and she’s all set to become a household name thanks to her hard work. Know more about her from Emily Luther’s wiki.

Emily Luther’s voice evokes the ambiance of a smoky jazz club, with lazy and relaxed patrons nursing their drinks. So, it’s no surprise that she managed to have Blake Sheldon, Adam Levine, and Jennifer Hudson turn their chairs around when she performed the classic, “Summertime,” at her blind audition.

Luther ultimately decided to join Team Adam. Since then, Emily Luther’s The Voice 2017 performances have only gotten better, making her a serious contender to win it all.

Keep reading to know more about this singing sensation.

Born on July 24, 1992, in Woonsocket, Rhode Island, Emily Luther’s age is 25. She is the first musician in the family, and her passion took her to Berklee College of Music, Boston.

After falling in love with musical theater at the young age of eight, Luther pursued her passion with great dedication. She honed her voice and skills by regularly performing at weddings and corporate events while keeping her dream of making it big as a professional singer alive.

Emily Luther’s family, including her parents and older brother, were backstage during her audition. They are overjoyed at how far she has come.

Darling, open your eyes. You’re made up of nothing more than you. Simply, beautifully, wonderfully, uniquely you. You’re a lovely and complex soul. An individually fascinating combination of thoughts, ideas, feelings, and emotions. Look past the mirror. Look at your soul. Only then will you see yourself as you truly are. Beautiful. So smile! And don’t forget to love yourself ? #beyourself #beyoutiful #empoweringwomen #letsdothis #theworldisyours #happysunday ©Daniel Gagnon Photography

While studying music therapy, Luther’s life changed for the better when her cover of Adele’s “Someone Like You,” with fellow YouTuber, Charlie Puth, went viral. The cover was named Perez Hilton’s Top Cover Song of the Week when it was released.

Luther was invited to perform on The Ellen DeGeneres Show. And as always, she blew the audience away with her fantastic performance. She was then signed to Ellen DeGeneres’ eleveneleven label.

Luther showed that she was one of the best singers among The Voice contestants when she faced Gary Carpentier in the battle rounds. Both contestants sang, “Send My Love (To Your New Lover),” by Adele and Luther was declared the winner.

When Luther beat Adam Pearce in the knockout rounds, she made her coach proud once more. Luther sang Pink’s “Glitter in the Air” to the accompaniment of a tuneful piano, and her high pitches left the judges and audience in stunned silence.

When the fan is blowing & your contacts are drying out. #blinktwiceifyouneedhelp #darncontacts #fbf

Now, Luther is preparing for the live shows. And, she is determined to win the competition with the help and guidance of Adam Levine.

Fans can check out her pictures on Emily Luther’s Instagram account, which features shots of her performing and inspirational quotes, as well as pics with her family and pets, and food. It is obvious that she is a fun-loving person who is determined to win The Voice season 13.

You can watch Emily Luther’s knockout performance below: