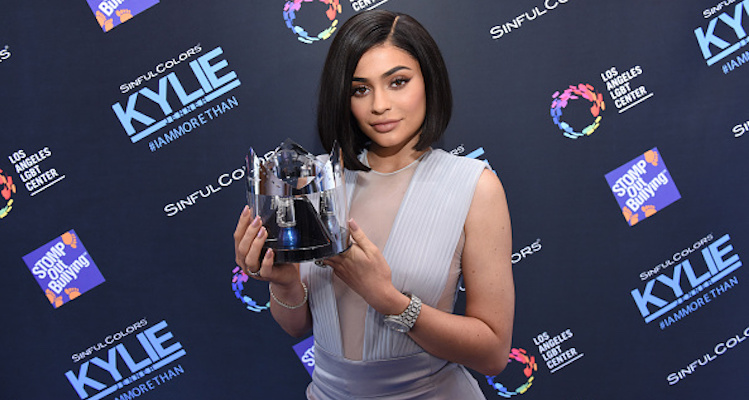 If you’ve been wondering about Kylie Jenner and her highly successful lip kit business, then look no further than Kylie Jenner’s Snapchat! Kylie, like her sister Kendall, may not be a Kardashian in name, but she sure has the business sense of one. From her mother “momager” Kris, to her sisters—the whole family have branded anything and everything they can, and now Kylie is getting her own billboard!

When the Kardashians and Jenners do anything, it’s never on a small scale, so we aren’t surprised that a simple bus bench wasn’t enough for the 19-year-old mogul. Kylie Jenner wanted bigger and better, and that’s exactly what she got!

Kylie took to social media to post a video of her new billboard, promoting her “Kylie Jenner Lips” line, which is part of her successful collection of Kylie Cosmetics. The video is black and white and the billboard stands right above the Al & Ed’s Autosound shop in Los Angeles. Kylie uses every chance she gets to show attention to her business (as any entrepreneur would) and it’s no wonder she made the Forbes 30 Under 30 list. Making the impressive list isn’t easy and, despite Kylie’s own business setbacks (mainly, her previous F rating), she managed to transform her brand and maintain her millions of followers.

Mirror, mirror on the wall, who’s the truest Kylie of all? It’s the Battle of the Kylies, as both Kylie Jenner and singer Kylie Minogue have been fighting over brand ownership! Jenner first came to prominence with her sisters on the famous reality TV show, Keeping up with the Kardashians and has been trying to brand her products in the U.S. Why can’t she? Well, she’s been blocked by Kylie Minogue, who won the trademark battle, and the two have since reached a settlement. Minogue was worried that people would confuse her brand with Jenner’s, and Minogue’s brand and name was established long before Jenner’s was. Sorry, Kylie!