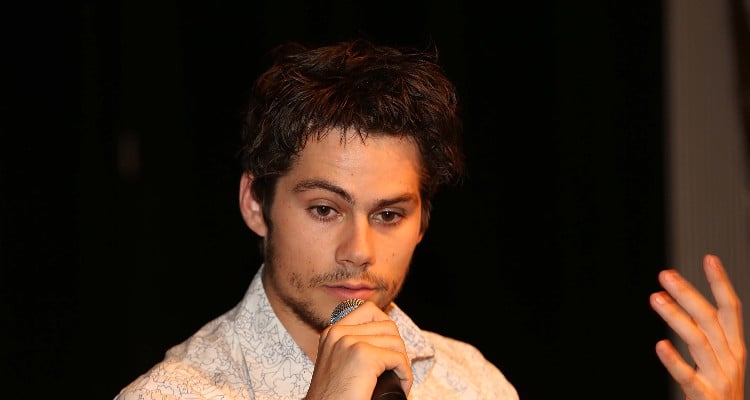 Dylan O’Brien is leaving the maze behind for an action thriller of a different kind in American Assassin. The new trailer is exciting, packed with action and suspense, but nobody can take their eyes off the shirtless Dylan O’Brien!

The Maze Runner is now an American Assassin in the movie’s new trailer. But all people are talking about is how swoon-worthy a shirtless Dylan O’Brien is! The Teen Wolf actor is seen shirtless at the start of the trailer before he turns up the heat by bulking up. It makes us want more of Dylan O’Brien’s shirtless pics. The 25-year-old actor is engaged to his long-time girlfriend, Britt Robertson, whom he met while they worked on The First Time.

“What is it you think we do here?” asks Michael Keaton, who plays a jaded war vet in American Assassin. “Kill people who deserve to be killed,” responds the brooding new recruit we know as Dylan O’Brien. Since landing the lead role in this summer blockbuster, O’Brien has been killing it in the gym (clearly) and fans have taken notice. To make this flick even more irresistible, we also have Taylor Kitsch, most notable for his role as Tim in Friday Night Lights. These two hotties on one big screen? What’s not to love? O’Brien plays Mitch Rapp, a CIA recruit in the big screen adaptation of Vince Flynn’s novel. The plot begins with O’Brien’s tropical beach proposal, that turns into a horrific scene when his fiancée is killed by terrorists. The grief-stricken Rapp joins his mentor in taking down the terrorists. American Assassin may be geared towards the male audience, but women are going to flock to the theaters for O’Brien! The movie is set to release in September this year. Until then, here’s a collection of Dylan O’Brien’s hottest pics to get you by.

I hope we see shirtless Dylan O'Brien as Mitch Rapp in #AmericanAssassin ? pic.twitter.com/EDFI2mWiDA

#2. The Internet rates this as the best casual shot of Dylan O’Brien for good reasons.

#3. This Teen Wolf is the gift that keeps on giving.

dylan o'brien shirtless is what I live for pic.twitter.com/8XakyIfhZX

Also Read: Sahara Ray Instagram: Check Out Her 10 Hottest Pics of All Time

#4. Start your day right, with a shirtless Dylan O’Brien pic.

I had such a bad headache last night that I didn't fall asleep tell 5am…, and I have to wake up at 7? #teenwolf #dylanobrien #shirtlessdylanobrien #StilesStilinski

#5. God bless this user and her Dylan O’Brien appreciation tweet.

#6. How did he go from cute as a button to being unbuttoned!? Not that we’re complaining!

Bonus: Check out Dylan O’Brien go from hot to hotter in the American Assassin trailer below!