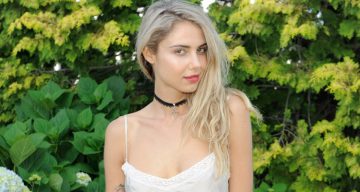 Even though Sahara Ray is a swimsuit designer, she seems to have an aversion to wearing them. Ray stripped down naked and frolicked under a waterfall in exotic Bali, Indonesia earlier this week. She took to her Instagram account and posted nude photos and videos of herself skinny-dipping! Check out Sahara Ray in all her beautifully bare glory!

It seems that anyone who dates Justin Bieber instantly becomes famous, as the paparazzi always tracks them down. But few people have become as famous as model Sahara Ray for her alleged tryst with the Biebs last summer. That’s right. Ray and Bieber spent an exciting week in Hawaii, where they both threw caution to the wind and ditched their clothes to enjoy the hot sun! Bieber got naked, and Ray went topless in the water as the paparazzi clicked away to glory. Sahara Ray’s nude pictures were splashed all over the media, and overnight she became famous for being “Bieber’s latest girlfriend.” If you want to see what happened in Hawaii, you can check out Sahara Ray’s Instagram account, which has Sahara Ray in a bikini, Sahara Ray sexy pics and more.

Who is Sahara Ray?

Sahara Ray is the daughter of famous surfing legend, Tony Ray from Australia. Ray’s mother is a realtor. Ray is a rising model and social media personality, who loves to post sexy and nude pictures of herself on her social media accounts. Though she was born down under in Australia, she currently lives in Los Angeles. She was born on March 10, 1993, which means that Ray is just 23 years old. Ray is 5’8” tall and weighs about 110-120 lbs. She is a natural blonde with hazel colored eyes. No wonder Bieber was transfixed when he was with Ray skinny-dipping in Hawaii! She’s absolutely gorgeous!

Ray has studied at the Fashion Institute of Design and Merchandising [FIDM] in Los Angeles, California and is interested in fashion. According to sources, she loves modeling in swimwear, and Sahara Ray swimwear pics are much in demand. People who have worked with her say that Ray is “easy to work with and doesn’t take herself too seriously. However, her fans do take Ray very seriously. Whatever she does becomes news quickly. Like what she did in Bali most recently! That’s right. On January 17, 2017, Ray stripped off and took a dip completely nude under a remote waterfall during her trip to Bali, Indonesia, and the Internet is going crazy for the pics!

How to make breakfast in the Gia Bottom ?✌? @sahararayswim

"She never looked nice. She looked like art, and art wasn't supposed to look nice; it was supposed to make you feel something." … One of my favorite quotes✨ @sahararayswim by @jordenkeith

Ray has posted photos and videos of her nude swim on her Instagram account and her Instagram Story account. In the video, she is seen completely naked as the rain falls down on her. She has also posed topless with sunflower emojis covering her breasts. Ray has been posting sexy photos of herself for a while now, ever since she went to Bali. The Internet is littered with photos and videos of Ray’s nude dip in the waterfall pool in the exotic location of Bali.

Getting Cozy, Getting Away

Ray loves swimming and the water so much that she is actually a swimsuit designer herself! According to rumors, Ray was involved with Australian singer and songwriter, Cody Simpson before she accompanied Bieber to Hawaii last summer. At the time, Simpson had just split up with model, Gigi Hadid. It was reported that Ray and Simpson had gotten “very cozy together” when they were a the Los Angeles nightclub. After the Bieber episode, Ray was out of the news for a while, but now thanks to her nude swim in Bali she is back in the news again! The water baby looks cool and detached, as she has fun with her friend in the natural pool.

There you have the best of Sahara Ray from her Instagram account pictures. Ray’s account is full of pictures where she is either nude, or wearing clothes that leave little to the imagination. So, after looking at these picture, it’s very easy to see why Ray’s fans can’t get enough of her!