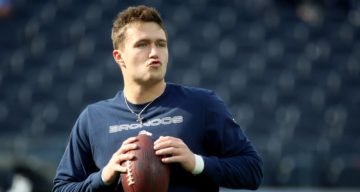 Drew Lock #3 of the Denver Broncos at SoFi Stadium on January 02, 2022 in Inglewood, California. (Photo by Katelyn Mulcahy/Getty Images)

Drew Lock was traded from the Denver Broncos to the Seattle Seahawks in March 2022. That also brings a new WAG to Seattle. Natalie Newman is Drew Lock’s girlfriend-turned-fiancée. They’ve given glimpses of their relationship on social media, but fans can’t get enough. Seahawks Nation especially wants to know more about the new quarterback and his gorgeous wife-to-be. So we’ve compiled everything there is to know about Drew Lock’s fiancée in this Natalie Newman wiki.

Natalie Newman was born on January 1, 1997, and is a native of Palm Beach, Florida. She is one of two children born to Maritza Newman and her husband.

Natalie’s brother, Danny Rodriguez, is a military veteran. Natalie has shown she is incredibly proud of her brother, and she was even happier when he returned from his tour.

Natalie Newman went to the Benjamin School in Palm Beach County. She then moved from Florida to Colorado, where she attended the University of Colorado Boulder.

Newman has a BS in strategic communication, advertising, PR, and media design, which she received in 2019. In 2020, she enrolled in the Rocky Mountain College of Art + Design. She studied sustainable interior design through 2022.

While Newman’s career is unspecified, she is building a presence online as an influencer. With an Instagram followership at 168K and growing, she has many sponsored posts as well. Newman’s fashion and travels are the main attractions of her online brand, but fans also flock to her profile to get glimpses of her relationship with Drew Lock.

Missouri native Lock played collegiate football with the Missouri Tigers before he was selected by the Denver Broncos in the 2019 NFL Draft. Not long after he came to Denver, he met college student Newman. Newman and Lock celebrated one year of their relationship in September 2020.

The quarterback popped the question to Lock after two years together. They announced their engagement on their respective social media on February 20, 2022.

The following month, the Broncos traded Lock to the Seattle Seahawks. Newman has not been active on social media since her engagement post, but she did showcase her support for Seattle through her Instagram bio.