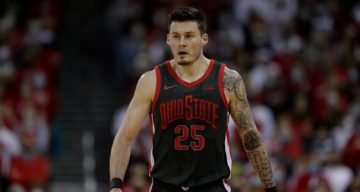 Ohio State Buckeye Kyle Young had to leave the Sunday (March 20) game mid-way after suffering a head injury. Young has suffered concussions thrice in the past year, earning a lot of concern from fans. Among the people closest to the basketball player, Kyle Young’s girlfriend and baby mama, Lexi Hall, was visibly worried about his condition. Her distress was shown on camera, much to the outrage of fans who criticized the NCAA Tournament broadcasters. The attention on Hall has also sparked interest in her background, and many are asking who she is. She’s received an outpouring of concern and support alongside Young. So we reveal details about Kyle Young’s girlfriend in this Lexi Hall wiki.

Alexis “Lexi” Hall was born on August 10, 2000. She hails from Columbus, Ohio, where her family is based.

Lexi is the eldest of four born to Erin and Aaron Hall. Her younger sisters, McKenzie, Brookie, and Tatum, are also athletes.

Their father, Aaron, is a baseball enthusiast and coach apart from his regular job. He is a site director for the High School Fall Baseball League and the owner of iCoachHitting.com.

Lexi Hall was an athlete during her student life. She played volleyball and was part of the track team at Saint Francis Desales High School. Before she graduated in 2019, she was also part of the math club, Chinese club, and other extracurriculars.

Hall joined the volleyball and track teams at Muskingum University. She majored in special education and art while recording noteworthy stats in volleyball during the 2019 season.

She is currently pursuing her MA in art therapy/therapist and is expected to graduate in 2023.

Ohio native Kyle Young graduated from Jackson High School near Massillon and went on to play basketball at Ohio State in the 2017-18 season. He has been in a relationship with Lexi Hall at least since 2018, when they began featuring each other’s social media.

Young and Hall announced they were expecting their first child together in June 2021, through their respective social media. They welcomed their daughter named Remi Capri Young, on December 22, 2021.

Kyle Young has suffered three concussions in the past year, and a fourth one during the NCAA Tournament game on March 20. He was rushed off the court during the game, and his condition has been concerning several fans.

While viewers awaited news about Young’s health, the broadcasters turned the cameras on a very distraught Lexi Hall in the stands. Social media users were quick to criticize CBS Sports and the NCAA Tournament for what they deemed as making a spectacle of Lexi’s worries.