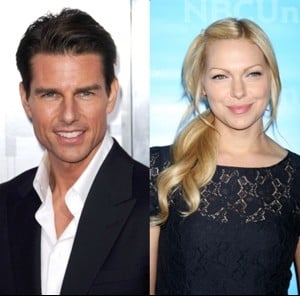 Tom Cruise has supposedly been trying to get back into the dating game since his May-December marriage to Katie Holmes came crashing down. There were even reports that the church of Scientology was auditioning young women for Cruise in hopes that one of them would be worthy enough to be his next wife. But the 51-year-old actor may have found a suitable match all on his own.

Cruise is reportedly dating, or has at least gone out on a few dates, with 33-year-old Orange is the New Black actress Laura Prepon, whom you might also recognize from her role as Donna on the television series That ‘70s Show. According to insiders, Cruise has “always been fascinated by her” and finally decided to take the plunge and ask her out.

The rumored celebrity couple enjoyed a romantic dinner in L.A. after Cruise reportedly sent a vintage car to pick her up. He also stocked the table with a vintage bottle of wine. “It’s clear Tom is smitten and after the date he was on cloud nine,” said a source. The celebrity couple has already gone on their second date apparently, and she even accompanied him to a dinner party at the home of fellow scientologist John Travolta.

Despite their 18-year age difference, Cruise and Prepon seem to be hitting it off quite well, and since they’re both practicing Scientologists and have been part of the same social circle for years, they already have a lot in common. “[Tom] is the happiest he has been since his divorce from Katie,” noted the insider.

What do you think: Do Tom Cruise and Laura Prepon make a good celebrity couple?