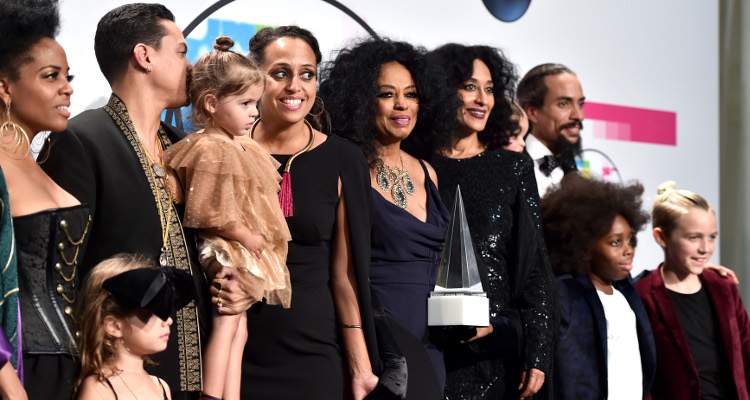 The evening of November 19, 2017 was a glittering affair as the 45th annual American Music Awards saw a Diana Ross performance that just stole the show! Ross was awarded the Lifetime Achievement Award, and she deserves every bit of that trophy! The icon, who has inspired many over the years, saved the best for last and brought her grandchildren out on stage! Here’s everything you need to know about Diana Ross’ family.

There are a few people on this earth who are very difficult not to like, and Diana Ross is one of them. She is full of grace and poise, and she is well-known for her incredible voice. The veteran singer received one of the most important awards at the AMAs last night, and Diana Ross’ grandchildren even joined her on stage during her performance!

A Legacy to Pass On

Diana Ross was born on March 26, 1944, making the icon 73 years young. The Supremes star was born in Detroit and was interested in music since she was a little girl.

Ross was 15 when she joined her first group called The Primettes, which was a sister group of its male version, The Primes. It was a great start for her, and their songs took flight, too.

Diana Ross went solo in 1970, and her singles are now classics that fans can’t stop listening to. Some of her all-time hit songs include, “I’m Still Waiting,” “Do You Know Where You’re Going To,” and “Ease On Down the Road” with the king of pop, Michael Jackson.

Ross was involved in a relationship with Berry Gordy, who was the CEO of Motown. The couple had a baby, Ross’ oldest daughter, Rhonda Suzanne Silberstein. Silberstein didn’t receive Gordy’s last name because when Ross was pregnant with her, she married Robert Ellis Silberstein, who was a music producer at the time.

Robert Ellis Silberstein raised Ross’ daughter as his own. However, Ross informed her daughter who her true father is when she was 13.

Robert Ellis Silberstein and Diana Ross had two daughters together. Tracee Ellis Ross and Chudney Lane Ross were born in 1972 and 1975, respectively.

Ross was living in Los Angeles with her husband and children until their divorce in 1977. The singer then moved to the Big Apple when the divorce was finalized.

Diana Ross met Kiss frontman Gene Simmons and dated him for three years. But, the relationship did not last.

In 1985, Ross met “the love of her life,” Arne Naess. The couple tied the knot in 1986, and the Norwegian shipping guru welcomed Diana Ross’ children to his already big family.

Naess had three children from a previous relationship, and now Ross was step-mother to Christoffer, Katinka, and Leona Naess, too.

Diana Ross and Arne Naess had two sons together named Ross and Evan Naess. The couple was married for 14 years, but they decided to get a divorce in 2000.

Naess was an avid mountaineer and would hike regularly. But, he died in a tragic mountain accident in South Africa in 2004.

Ross still feels that Naess was her true love. Ross was a great step-mom to Naess’ children and remains close to them, even after their father’s death.

Diana Ross’ oldest daughter married Rodney Kendrick, and the couple had Raif-Henok in 2009.

In 2012, Ross’ granddaughter Callaway Lane came along, and she was born to Chudney and Joshua Faulkner.

It’s no surprise that the singer is hella rich. But just how rich? Diana Ross’ net worth is estimated at a whopping $250.0 million!

Ross earned a whopping $20.0 million when she signed a deal with RCA Records in 1981. She powered through the ‘90s with more album releases and chart-busting songs, and by 2000, she was already in the triple digits.

The iconic singer has been an inspiration to many people and a beacon of strength for women for over three decades. Diana Ross’ AMA 2017 win last night was well-deserved, and we sure hope to see more of her in the future!