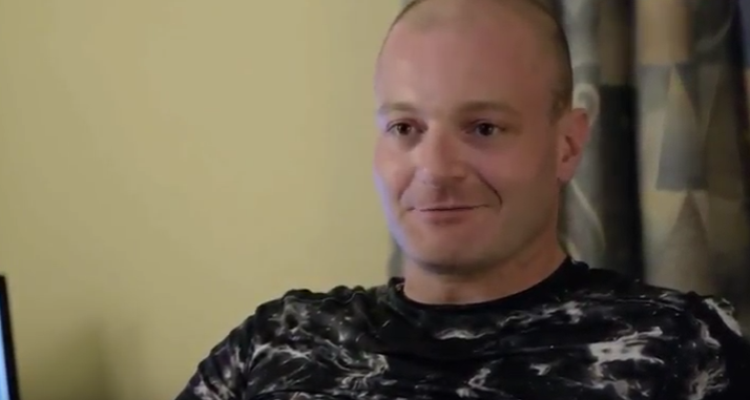 Christopher Cantwell is a prominent Charlottesville white nationalist, who came to fame thanks to a Vice documentary. He is seen crying in a video he made of himself after an arrest warrant was issued for him, following his involvement in the Charlottesville riots.

Charlottesville, Virginia was gripped with violence this past weekend. White nationalists were protesting against the removal of Confederate monuments and violently clashed with counter-protesters, resulting in the death of Heather Heyer. Christopher Cantwell was one of the Alt-Right protesters and he was featured in a documentary on the city. Now, after the dust has just begun to settle, a recently released video shows Christopher Cantwell crying over his potential arrest. Learn all about the white nationalist and more about his tearful video in our Christopher Cantwell wiki.

Who is Christopher Cantwell?

The Southern Poverty Law Center describes Cantwell as “an anti-Semitic, Alt-Right shock jock and an unapologetic fascist, who spews white nationalist propaganda with a libertarian spin.” Cantwell sees himself as a writer, videographer, and radio personality.

Born in 1980, he lives in Keene, New Hampshire but grew up in Long Island. He used to work in the information technology field in New York before moving to New Hampshire. According to the SPLC, he has a checkered past as a one-time drug dealer. He’s currently an aspiring stand-up comedian, though none of his views are anything to laugh about.

He Has a Podcast

Christopher Cantwell has a call-in podcast talk show called Radical Agenda, which is live-streamed from his New Hampshire home via Facebook three days a week. He also writes essays on his website, which tell us quite a few things about him. He dreams of a state free of African-Americans, Jews, and non-white immigrants. He has some shockingly negative views of people of color.

He says he voted for Donald Trump but many believe he’s not a supporter of the current President. He believes President Trump isn’t white nationalist enough because he let Ivanka Trump marry Jared Kushner, who’s Jewish. In the past, Cantwell called to overthrow the government, violence against law enforcement, and the removal of Democrats.

Now, Facebook and Instagram have banned the accounts associated with Chris Cantwell and his podcast. Facebook spokeswoman Ruchika Budhraja said they took down at least eight pages connected to Cantwell, which were in violation with Facebook’s policy against hate rhetoric. He confirmed through his blog that Facebook shut down his pages and claimed that PayPal closed his account. “Facebook and Instagram is one thing but not being able to participate in the financial system because of your political opinions is something that, you know, people should worry about in America,” he said.

look at this cowardly American Terrorist.
now he is afraid to die?
He admits what kind of coward he ishttps://t.co/PmYfN9c69v

He Had a Short Political Career

Cantwell told Hatewatch about his run-ins with the law when he was a teen. He also spent a few months in jail when he pleaded guilty to charges of criminal possession, possession of a weapon, and driving while intoxicated. His criminal history came to haunt him when he ran for Congress in 2009 as a member of the Libertarian Party. But another DWI (Driving While Intoxicated) incident in the past cut his political career short.

He first lauded the Libertarian Party for helping him turn over a new leaf. But when he was beginning to advocate violence, he was kicked out. He went from one Libertarian group to another until he leaned right and is now a proponent of Alt-Right.

Why is Christopher Cantwell Crying?

The 36-year-old was involved in the Charlottesville protests as one of the organizers and documented his journey to protest against the removal of Confederate monuments. He was featured in the Vice documentary, Charlottesville: Race and Terror where his white nationalist rhetoric gained him attention on the Internet. He spoke about using violence against non-white people and showed off his guns. The documentary showcased his hate speeches, marches, and the events leading up to the afternoon of the protest that ended a woman’s life, which he viewed as a victory. It was after he appeared in the documentary that Facebook banned his accounts.

Police have issued an arrest warrant for his involvement in the Charlottesville protests. But Cantwell, who had previously claimed he was ready for violence, was not as tough as he made himself out to be. In a tearful video uploaded to YouTube, he is seen crying about his impending arrest.

He says in the video, “I have been told there’s a warrant out for my arrest. With everything that’s happening, I don’t think it’s very wise for me to go anywhere. There’s a state of emergency. The National Guard is here!”

My favorite genre of art is crying racist. #ChristopherCantwell pic.twitter.com/uugIHUyG0P

In the Vice interview, he talks about owning guns and making himself ready for violence. In his YouTube video, he says he is a law-abiding citizen who will let law enforcement take him. “If I can confirm you are in fact law enforcement I will give you my location and let you come and get me,” he says adding, “I am armed, I do not want violence with you. I’m terrified, I’m afraid you’re going to kill me, I really am.”

Since the video went viral, Cantwell has been laying low. He has been subjected to mockery by Twitterverse for his cowardice. As it turns out, all his tough-talk proved to be just that. Some kind users are making a real point to differentiate the white nationalist from the other Christopher Cantwell, the writer and creator of AMC’s Halt and Catch Fire who, frankly, is one cool guy.

Found out I share names with the white supremacist featured in the Charlottesville Vice News piece. Signal boost that he has a micropenis.