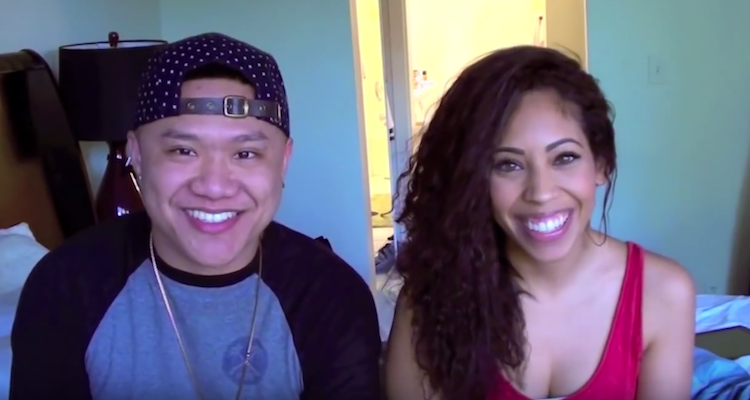 YouTube.com/Couples 123 Tag- How Well Do We Know Each Other? Tim and Chia

Who is Chia Habte?

Before we get into the engagement story, we should get to know the future Mrs. Chantarangsu a bit better. You didn’t think DeLaGhetto was his real last name, did you? While her better half is a 31-year-old comedian-rapper on Nick Cannon’s Wild ‘N Out, Chia Habte’s age is unknown, as well as Chia Habte’s ethnicity. But we do know that Chia Habte’s family is from Canada —Saskatchewan to be exact! She’s a blogger, and writes about beauty tips, lifestyle, and more, and has an active online presence. Her blog, Just Peachy, is the place to get in touch with her and learn more about her personal life.

How They Became a Couple

Believe it or not, but a psychic told Habte that she was going to meet someone on a trip. And sure enough, she and a few of her girlfriends took a trip to Los Angeles/Las Vegas and she met DeLaGhetto! They stayed in touched, mostly by messaging on Facebook, until he made it official in 2011.

“After a YEAR of Facebook messaging, it just so happened that we were going to be in Toronto the same weekend (call it fate) and we made plans for me to come check out his show!,” she recalled in her blog. “I dragged my girlfriend with me and it just so happened that her boyfriend was hosting the event Tim was performing at. So, it all ended up working out quite nicely in the end. Tim invited us to the after party and we sipped on free alcohol and danced the night awaaaay (sounds cheesy, but it’s true). Toronto came to an end and I definitely thought, ‘I LIKE THIS GUY’ and guess what?! The feeling was mutual… [sic]”

She continued: “Now came the tricky part. I lived in Canada. Tim lived in LA. Neither of us ever had a long distance relationship before, but we were willing to put it to the test. So what did we do?! Said eff it and ignored all odds and hoped it wouldn’t be an issue down the road. We slowly, but surely became frequent flyers.”

“Eventually, Tim officially asked me to be his girlfriend in the cutest way,” she added. “As I flew into LAX and came down the escalator to baggage claim, I found him standing there with a bouquet of roses and a sign that said ‘Chia Habte.’ Like one of those drivers that pick you up, you know the kind. As I stared at him in awe he flipped the sign around and it said, ‘Will you be my girlfriend?’ Isn’t that the CUTEST?! We’ve been a couple ever since.”

After all those frequent flyer miles, the happy couple finally took the next step. It’s wedding season after all, so we’re not surprised that DeLaGhetto put a ring on it! While in Toronto, in what looks to be a theater, the Wild ‘N Out star proposed to his bride-to-be in front of a live audience! While Habte’s parents and brother couldn’t make it in person, they were there via FaceTime.

“Look what I went and did to @chia_habte! You already know I recorded the whole thing,” DeLaGhetto captioned the Instagram album.

To learn what’s going on in Habte’s life, or to get a more than enough of Chia Habte’s pics, feel free to follow her online and go on her journey with her. Here’s hoping we get a sneak peek of the wedding planning! Do you think her future husband can keep a straight face?