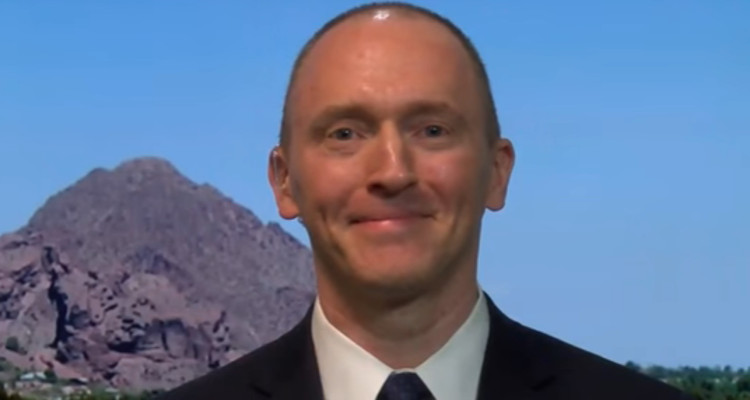 The FBI has evidence against Carter Page, a former Foreign Policy Adviser to Donald Trump, stating that Page was in touch with Russian agents during Trump’s campaign. Since the news broke out, there is just one question on everyone’s mind: Who is Carter Page? Keep reading for information from Carter Page’s wiki.

Carter Page praised Russian President Vladimir Putin and highly criticized U.S. policies nearly a month later. Last summer, a secret order was granted to the FBI to monitor the communications of Carter Page. This was due to speculation of links between Page and Russia throughout Trump’s presidential campaign. The FBI was of the belief that Carter Page was acting as an agent for Russia, despite his denial of any wrongdoings.

Earlier this month, it was discovered that the FBI was successfully granted a FISA court order to investigate and keep an eye on Page’s communication. This investigation started last year with Page, who continuously denied these accusations.

Carter William Page was born on June 3, 1971, in Minneapolis, Minnesota and raised in Poughkeepsie, New York. His parents are Allan Robert Page and Rachel Page. Allan Page was a manager as well as an executive with Central Hudson Gas & Electric Company. In 1989, Page graduated from Poughkeepsie’s Our Lady of Lourdes High School, before going on to Union College for his Bachelor’s and Master’s degrees.

He Served in the Military

Carter Page is a 1993 graduate of the United States Naval Academy. He was in the Navy for five years, including his tour as a Marine Intelligence Officer in the Western Sahara. In 2004, he started working at Merrill Lynch’s office, before becoming the COO and president. After he quit Merrill Lynch in 2008, Page started his own investment fund, Global Energy Capital.

He also worked on numerous transactions involving Russian oil companies. During the 2016 presidential campaign, Carter Page told Bloomberg, that he was named one of Donald Trump’s potential Foreign Policy Advisers saying, “So many people who I know and have worked with have been so adversely affected by the sanctions policy.” He added, “There’s a lot of excitement in terms of the possibilities for creating a better situation.”

Donald Trump was asked in an interview if he could reveal some members of his Foreign Policy Team and The Washington Post released the transcript of the interview. Trump answered, “Well, I hadn’t thought of doing it, but if you want I can give you some of the names, Walid Phares, who you probably know, PhD, adviser to the House of Representatives caucus, and counter-terrorism expert; Carter Page, PhD; George Papadopoulos, he’s an energy and oil consultant, excellent guy; the Honorable Joe Schmitz, [former] inspector general at the Department of Defense; [retired] Lt. Gen. Keith Kellogg; and I have quite a few more.”

As Carter Page was not well known at the time, further questions of Page’s role in the Trump administration were asked. In response, he denied that Page was a part of the National Security team, with a few of Trump’s sources further adding that Carter Page was never a part of Trump’s campaign and never met the president. According to KellyAnne Conway in the Washington Post article that was published last year, “I have not spoken with him at all, in fact, meaning he’s not part of our national security or foreign policy briefings that we do now at all, certainly not since I have become campaign manager,” she said. “And I also will say, if he’s doing that, he’s certainly not doing it with the permission or knowledge of the campaign, the activities that you described.”

Although Page was one of Trump’s originally announced foreign policy advisers, it seems Trump and his cabinet would like to completely wash their hands of him at this point.