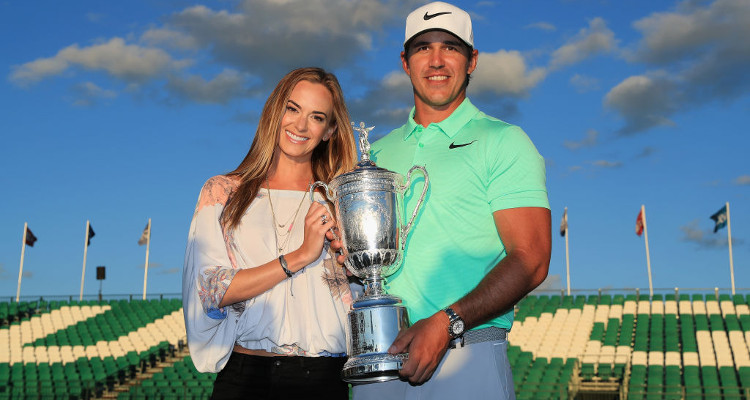 Brooks Koepka won the 2017 U.S. Open title, the first major win of his golf career. His girlfriend was certainly happy —until that awkward moment when Joe Buck thought she was Koepka’s ex-girlfriend!

Way to dampen the celebrations, Joe Buck! The sportscaster may have just spoiled Brooks Koepka’s biggest career win so far with his recent gaffe. The professional golfer won the 2017 U.S. Open and his girlfriend, Jena Sims, shared the moment with him. That’s when Buck called her Becky Edwards. Who is Brooks Koepka’s girlfriend? Well, it’s definitely not Becky Edwards! Here’s more about the case of mistaken identity in our Jena Sims wiki.

#1. She was Miss Georgia

Jena Michelle Sims grew up in Winder, Georgia and graduated from Winder-Barrow High School. She briefly attended Belmont University in Nashville, Tennessee, where she studied international business. She left college to move to Hollywood to pursue modeling and acting.

#2. She Worked with A-Listers

Sims started pursuing acting in 2012. Her first lead role was in the comedy horror, Attack of the 50 Foot Cheerleader. She also had a small role in Last Vegas, which starred Michael Douglas, Robert De Niro, and Morgan Freeman. She is best known for kissing Jerry Ferrara in the movie.

She has appeared on shows like Entourage, Dexter, The Vampire Diaries, CSI, and One Tree Hill. The 28-year-old has appeared in movies like Kill the Messenger and Three-Headed Shark Attack. She’s got more thrillers in store for 2017 and 2018. With her body of work, Sims has earned a $2.0 million net worth in her career, so far.

#3. She Founded a Charity

Sims has more than 85,000 followers on Instagram, where she not only posts modelesque pictures of herself, but also updates fans on her charity. She runs the non-profit, Pageant of Hope that hosts beauty pageants for children and teenagers who face various disadvantages in their lives. The pageants have been held in Winder, Tennessee, New York, Michigan, Wisconsin, and California, and continues to expand.

Her work has been recognized with accolades like the Southern Hero award, the Prudential Spirit of Community award, and an award from the Caring Institute in Washington D.C. Pageant of Hope has also won several awards for its work. With her charity, Sims has also traveled around the world to help disadvantaged children.

So much gratitude for this group of selfless ladies. Special thanks to those who donated to me personally (tagged). We raised enough money to hold the @pageantofhope and provide housing for a family in the town! Special to have this event on Mother's Day weekend w/ @jenasmom23!

Before Sims, Koepka was dating professional soccer player, Becky Edwards. She played in the National Women’s Soccer League and currently plays in a Swedish club. Edwards was considering retirement when the Swedish team, Kristianstads DFF, came calling and she put off retirement for few more years.

The Pennsylvania native was a student at Florida State University, where Koepka played collegiate golf. She was often seen at his golf tournaments in the cheering section.

It appears that Fox sportscaster, Joe Buck hadn’t been informed that Koepka and Edwards broke up. Soon after winning the U.S. Open, an ecstatic Koepka was being congratulated while Buck and his colleague, Brad Faxon were providing the commentary.

When Jena Sims gave her boyfriend a kiss, Buck identified her as Becky Edwards and went on to give a brief description of the soccer player. Except that it wasn’t Edwards. “Well, actually,” said Faxon a few minutes later, “Joe, that’s actually his new girlfriend, that’s Jena Sims. Brooks told me secretively that they were together this week.”

“Oh, really, look at you up on all the PGA Tour gossip!” Buck quipped to cover up his gaffe. But by then it was too late. When Koepka and Sims replay the moment when the golfer won his first major title, they will be reminded of Buck’s mistake.