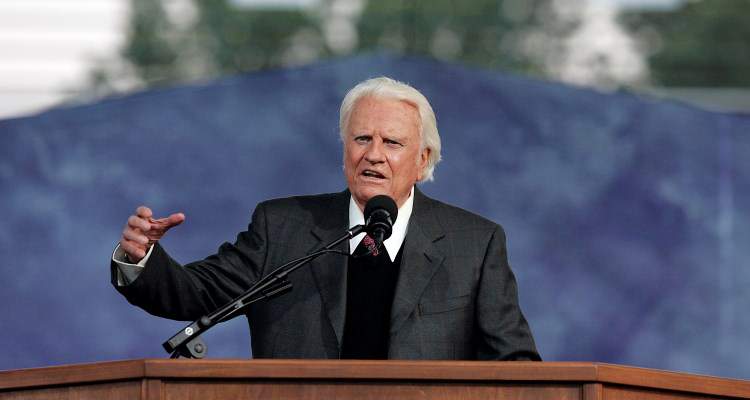 It has been confirmed that one of America’s most beloved has passed at the age of 99. He was known internationally as one of the most amazing preachers and fans are mourning his death today. Known as “America’s pastor,” (and one of the richest pastors), it’s no surprise that people are wondering about Billy Graham’s net worth before he died. Billy Graham’s net worth was estimated at $25.0 million and we have all the details on how this popular pastor earned such wealth in his life.

Rev. Billy Graham was born William Franklin Graham Jr. on November 17, 1918, and grew up in Charlotte, North Carolina on a dairy farm. He was the oldest of four children and attended Sharon High School and Bob Jones College. He discovered his spiritual path at the age of 16 and began his career as a pastor in the 1940s.

Graham’s late wife was named Ruth and they were married from 1943-2007. They had five children and several great-grandchildren.

Graham was also close friends and allies with Dr. Martin Luther King Jr., who once said, “Had it not been for the ministry of my good friend Dr. Billy Graham, my work in the Civil Rights Movement would not have been as successful as it has been.” Graham was against segregation. He didn’t discriminate and instead chose to help shape worldviews, inclining people of all backgrounds to come together to form a relationship between the Bible and contemporary secular viewpoints. He became famous worldwide for his teachings and the ideals he hoped to spread among all.

Graham built up evangelicalism so high in America, that it even rivaled liberal Protestantism and Roman Catholicism. To give you an idea of his audiences, Graham preached to more than 210 million people in 185 countries and territories around the world. Some reports estimate that he converted over 3 million people to Christianity in the span of his career.

On Wednesday, Graham died “just before 8:00 a.m.” at the age of 99, at his home in Montreat, North Carolina. According to Samaritan’s Purse (the nondenominational evangelical Christian organization led by the late pastor’s son, Franklin), Graham died peacefully surrounded by family.

While many believe that pastors make a modest living, Graham was an unusually wealthy man who preached to millions of people who traveled to hear him speak. While he was a millionaire, he actually wasn’t the richest pastor in the country! His net worth of $25.0 million was surpassed by Kenneth Copeland, Pat Robertson, Benny Hinn, and Joel Osteen. It is not surprising to many in the states that pastors indeed make this much money. (Think of the size of many of some of these congregations!)

After his father’s death, Franklin took to social media to remember his father, saying, “My father @BillyGraham was once asked, ‘Where is Heaven?’ He said, ‘Heaven is where Jesus is and I am going to Him soon!’ This morning, he departed this world into eternal life in Heaven, prepared by the Lord Jesus Christ—the Savior of the world—whom he proclaimed for 80 years.”

Despite being beloved by many, Graham wasn’t without his critics. His image was tainted in 2002 when a conversation with his friend President Nixon (that had secretly been recorded 30 years ago) came to light. In the conversation, they talked about how they believed liberal Jewish people were the reason for pornography and that they controlled the media.

“A lot of the Jews are great friends of mine,” Mr. Graham said at one point on the tapes. “They swarm around me and are friendly to me because they know that I’m friendly with Israel. But they don’t know how I really feel about what they are doing to this country.” Though many were up in arms when the tapes were revealed, it really didn’t taint his image all that much. He continued to inspire millions through his words and people still considered him a good man.

He was more commonly known by a more positive quote he used to share: “My home is in Heaven, I’m just traveling through this world.”

Remembered by Past Presidents

For decades, the late pastor was a counselor to several U.S. presidents and even spoke at Nixon’s funeral in 1994.

All those years later, he was still greatly admired by all today, even the current U.S. President, Donald Trump.

“The GREAT Billy Graham is dead,” tweeted President Donald Trump. “There was nobody like Him! He will be missed by Christians and all religions. A very special man[sic].”

President Barack Obama also tweeted, “Billy Graham was a humble servant who prayed for so many – and who, with wisdom and grace, gave hope and guidance to generations of Americans.”