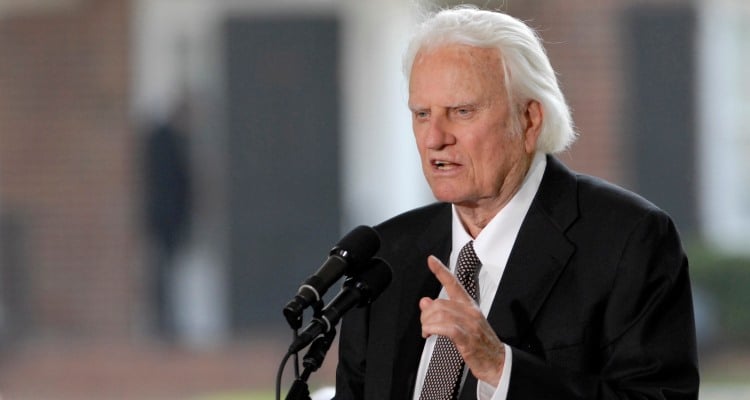 Whether you are religious or not, there is no doubt that you’ve heard the name Billy Graham before. A religious leader that has had the ear of politicians, celebrities, and presidents for decades, he was a leader many turned to for faith. But it was reported this morning that Billy Graham passed away at the age of 99. With Billy Graham’s death comes an end to an era of the most powerful preacher in the world.

Billy Graham began his pastoral career in the early 1940s. He was an American evangelical Christian evangelist, and an ordained Southern Baptist minister, who went on to become possibly the most famous preacher in the world. He was born on November 7, 1918, and grew up on a dairy farm in North Carolina.

He quickly began ministering via a radio show in 1944. It would be his use of media that would help bring Graham to the attention of the world and become the “most influential preacher of the 20th century.”

In 1947, Graham began his first crusade. These huge revival meetings were a center point of Graham’s career up until his retirement. Graham got so popular as a Pastor, that he would rent out stadiums to host his huge church events and would often be featured on network television. He was a staple on television as his sermons became so famous they were broadcast regularly.

As his popularity increased, so did his ratings, and soon Graham was seen/heard on all airwaves. From radio to television, Graham spent six decades preaching to huge audiences on and off the air, gaining most of his fame for hosting the annual Billy Graham Crusades. (Some of which are still being re-broadcasted today!)

One of his largest crusades occurred in Moscow, Russia, in 1992, where 150,000 people attended! Another crusade took place in South Korea and drew up to an estimated 1 million people!

While Graham was conservative towards many issues, he was progressive on others. Graham became one of the first nationally known white preachers to support the civil rights movement and the work of Martin Luther King Jr. He even reportedly bailed King out of jail during King’s Birmingham campaign!

Graham was a spiritual advisor to a number of U.S. presidents, including Dwight D. Eisenhower, Lyndon B. Johnson, and Richard Nixon. Johnson, in particular, became close friends with Graham.

Stepping Away and Passing On

In 1989, Pastor Billy Graham was diagnosed with Parkinson’s Disease. Between Parkinson’s and other health issues (including prostate cancer), Graham retired from public life in 2005. He turned over his ministry to his son, Franklin.

While the details of Billy Graham’s cause of death have not yet be released, we do know that he passed away quietly this morning. Billy Graham’s family surrounded him as he passed. He lived a long and fulfilling life, spreading the word of God and inspiring the lives of all those who followed him. He died at the age of 99.

At a news conference in 2005, Graham spoke about his mortality.

“Do I fear death? No. I look forward to death with great anticipation. I’m looking forward to seeing God face to face, and that could happen any day.”

Pastor Billy Graham can now rest peacefully in the arms of the Father, his Lord and Savior.