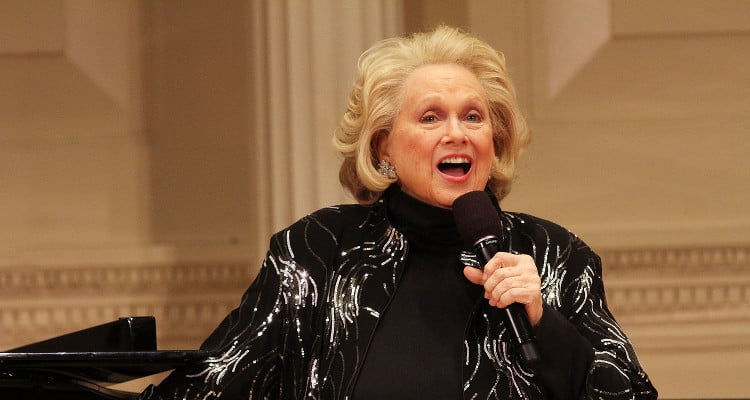 Legendary Broadway singer and actress, Barbara Cook passed away from respiratory failure at the age of 89. She conquered Broadway with stand-out performances in musicals like The Music Man, The King and I, and Show Boat. In her later years, she made a comeback as a cabaret and concert singer, winning over a new generation of fans. Her struggles with alcoholism and obesity drove her to achieve excellence in her truest passion, singing.

Barbara Cook’s death is the end of an era. She was a singer and actress who first achieved fame in the 1950s when she starred in original Broadway musicals like Plain and Fancy, Candide, and The Music Man. She performed in theater until the mid-1970s before starting a career as a cabaret and concert singer. She also recorded and released dozens of albums and became one of the most loved and respected singers in the nation. Cook passed away on August 8, 2017, at the age of 89 after regaling audiences for more than six decades. Barbara Cook’s cause of death was respiratory failure, and she passed away in her home in Manhattan, New York City. We have some details from Barbara Cook’s wiki right here.

Born on October 25, 1927, in Atlanta, Georgia, to Nell Harwell and Charles Cook, Barbara Cook was always praised for her fantastic lyric soprano voice. Her parents divorced when she was still a child, and she lived with her mother. Her younger sister died from pneumonia and whooping cough, something three-year-old Cook had, leaving the singer to feel guilty throughout her childhood. Cook began her career in 1948 in New York City where she initially sang at clubs and theaters before making her Broadway debut in the 1951 musical Flahooley. Her next role in the musical Oklahoma! won her fame, allowing her to tour the country.

The Queen of Broadway

Barbara Cook was for me living proof of theater singing could also be great singing. I only heard her live once, but I feel like I don’t go more than a week without hearing her in my mind. She will continue to be an inspiration for me and all my students #barbaracook #marionthelibrarian #cunegonde #amaliabalash #sallydurantplummer

Cook made her TV debut on Armstrong Circle Theater in 1952, and later appeared on shows like The Perry Como Show, The Ed Sullivan Show, The United States Steel Hour, The Dinah Shore Chevy Show, and Play of the Week. Thanks to musicals like Candide and Plain and Fancy, Cook became one of Broadway’s best ingenues and a crowd favorite. Her best moment came when she won the Tony award for her performance in the 1957 hit The Music Man. Cook later appeared in musicals like The King and I, Show Boat, The Unsinkable Molly Brown, Funny Girl, and The Glass Harp.

In the 1970s, Cook succumbed to depression, obesity, and alcohol, and had trouble getting work on stage. Then she met and befriended noted composer and pianist Walter Harper, and her life changed for the better. Harper encouraged Cook to hold concerts, and built up her confidence. Cook quit drinking in 1977 and started a fruitful collaboration with Harper that continued until his death in 2004. At the time of her death, Cook was recognized as an expert “interpreter” of musical theater songs and standards as well as one of the best singers in the country.

Fighting against the Odds

Rest In Peace dear, sweet, wonderful Barbara Cook. Thank you for your genius. You will be so missed. ❤️????

Barbara Cook’s YouTube videos showcase her exquisite singing and magnificent stage presence, for which she was so well known. There is no information on Barbara Cook’s net worth, but considering her long career on stage and in concerts it must be substantial. Though she faced troubles with her weight, she spoke out saying, “I decided that I had to try to be comfortable with my body as it was because otherwise you just live in a closet, you don’t go out.” Cook’s triumphs, struggles, and talent have made her an indelible and undeniable part of the great American songbook over the last seven decades.